Trump's Obama attacks stem from his belief no Black man should overshadow him: columnist 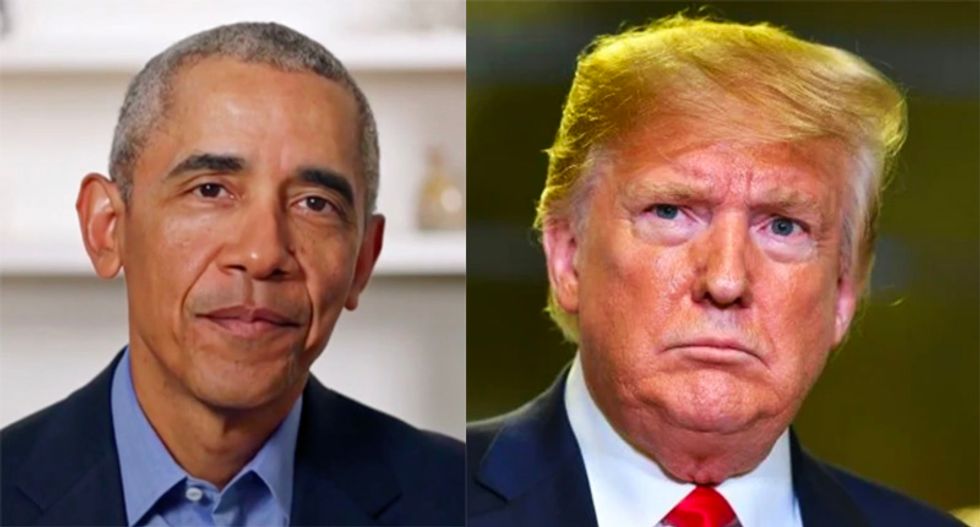 In a blunt-talking column for the New York Times, Charles Blow claimed that former President Barack Obama "lives" in Donald Trump's head because the current president knows his predecessor is everything he wishes he could be.

By which Blow means, "intellectual, articulate, adroit, contemplative and cool."

More importantly, he wrote, Trump is a racist at heart who can't stand a black man overshadowing him -- and still does more than three years after leaving the Oval Office.

"Trump’s run for president was in part triggered by his enmity for Obama, his desire to one-up him, and he has performed his presidency as a singularly focused attempt at Obama erasure, dismantling what he can of what Obama built and undoing policies Obama instituted," Blow wrote. "He convinced himself that Obama was the convenient recipient of affirmative action adulation from a world thirsty for racial recompense, an assuaging of white guilt."

To bolster his case, Blow quoted Trump from an NBC interview years ago where he said of African- Americans, "A well-educated black has a tremendous advantage over a well-educated white, in terms of the job market. I’ve said on occasion, even about myself, if I was starting off today I would love to be a well-educated black because I really believe they do have an actual advantage today.”

For Trump, Obama is an example of what he was talking about, Blow said.

"Trump adheres to the theory of unearned black privileges at the expense of white effort, that there is a hand-me-out meritocracy specifically for black people, a form of cultural welfare, " he explained. "This made Obama an early target for Trump. He questioned Obama’s birth and his heritage, his abilities and educational pedigree. He questioned his leadership and his work ethic. Trump knew the terrible legions of flaws he possessed and was incredulous that this black man could be devoid of any."

"So, he feverishly searched for error, sometimes inventing it, moreover projecting his own error onto Obama," he added.

Blow went on to note that Trump's belief about black Americans is, for the large part, mirrored by his most rabid followers.

"Trump’s view of him perfectly aligned with a larger phenomenon: A significant swath of white America grated at the uppityness of this black man who would set the tone for how Americans should behave, and his black wife who would lecture them about what to eat," the columnist wrote. "These voters chose the opposite of Obama, they chose the moral and intellectual antithesis, someone who could arrest the advance that Obama represented: an ascension of multicultural power and a coming erasure of white advantage and the dominance of white culture, all of which establishment forces had either allowed or encouraged. Trump was elected to restore the cultural narrative of the primacy of whiteness."

Blow concluded that Obama -- who is now starting to push back against Trump after remaining quiet -- is once again the focus of the president's attacks because he is trying to recreate his 2016 success.

"Trump is trying to make Obama his Willie Horton, the black criminal George Bush successfully used as a racial cudgel in his race against Michael Dukakis in 1988. Trump believes that there is a seesaw mechanism to his political fortunes: If he can drag someone down, it will lift him up," he explained before adding, "For now, that person is Obama, the man who lives in Trump’s head, who stalks his dreams, the countervailing symbol to Trump’s deficiencies."