WATCH: Minneapolis investor calls security on black businessmen for ‘trespassing’ in their own building 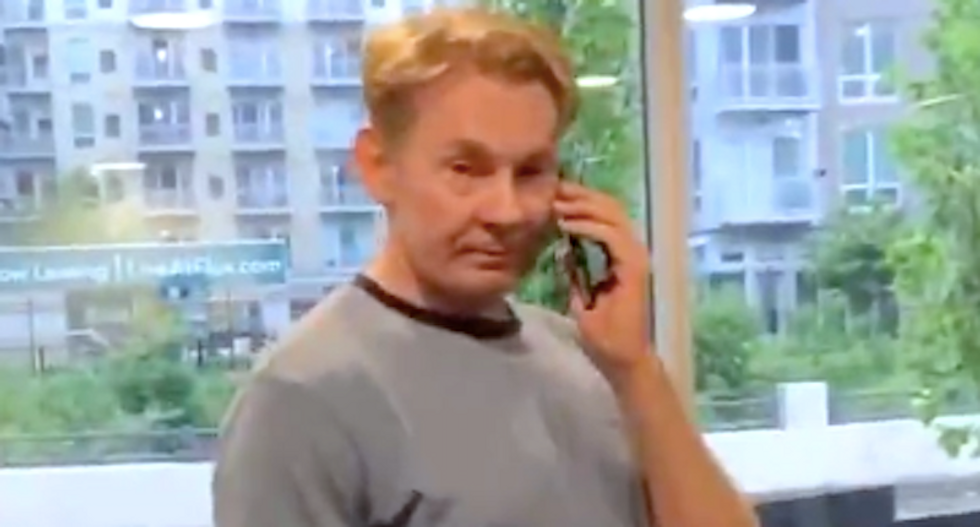 A group of black businessmen was confronted by a white venture capitalist for using the private gym in the Minneapolis building where they rent an office.

The Tuesday evening encounter was recorded by one of the men who own the digital marketing firm Top Figure, and shows venture capitalist Tom Austin asking whether they "belong" in the shared private gym.

"What office are you in?" Austin says, as the men try to explain they are tenants in the building. "I'm calling 911 now."

The men told Austin, who identified himself in the video, they were all tenants and pointed out later they needed key cards to access most parts of the building.

"Granted in order to enter the building you NEED a key card to enter EVERY part of the building which EACH of our team members individually have," the men posted on their company's Instagram page. "We all pay rent here and this man demanded that we show him our key cards or he will call the cops on us. We are sick and tired of tolerating this type of behavior on a day to day basis."

The video shows Austin reporting the men to MozAic East building security, and he later told Bring Me The News that some of the men appeared to be trespassing.

"One of the tenants brought 4 friends and I complained to them that this isn’t right and it's unfair to the tenants who pay," Austin said. "They got in my face in a very threatening manner and I threatened back to call [building] security."

"I would have done this regardless of race," he added, "so this is bullsh*t."

The incident took place shortly before protests erupted in Minneapolis over the police killing of George Floyd a day earlier, and a day after another viral video showed New York City investment manager Amy Cooper call 911 and report that she was being threatened by a black bird watcher who asked her to follow Central Park rules for dogs on leashes.

"There is nothing inclusive about the name 'Bde Maka Ska,'" Austin wrote in 2017. "[My neighbors] are upset that American Indian activists seem to have hijacked the discussion and that public officials have not made a bigger effort (and process) to enroll the entire community in a discussion about what alternative names are 'more inclusive' than Lake Calhoun."

"These people raised a good question: What exactly have the Dakota Indians done that is a positive contribution to all Minnesotans?" he added. "What is the heroism or accomplishment that we are recognizing in order to justify renaming the lake to Bde Maka Ska? Unfortunately, nobody had any answers."

Normally we don’t speak out about encounters of racial profiling and age discrimination that we face day to day in our lives as young black entrepreneurs. Although today May 26th 2020 7:51pm we encountered a situation where a man entered the facility, a shared private gym that we utilize in our @wework @mozaic_east office located in uptown Minnesota. Granted we’ve been in this office space and have rented and grown our business for the past 1 year and half here. As we were working out this man approached and immediately asked us who we were and if “WE BELONG” in this building. Granted in order to enter the building you NEED a key card to enter EVERY part of the building which EACH of our team members individually have. We all pay rent here and this man demanded that we show him our key cards or he will call the cops on us. We are sick and tired of tolerating this type of behavior on a day to day basis and we feel that we had to bring light onto this situation.