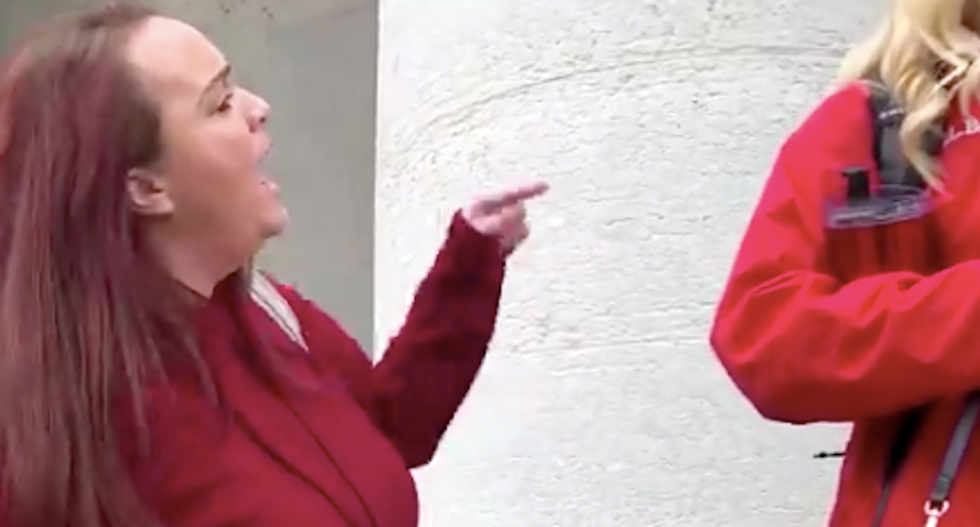 An angry demonstrator berated a TV reporter from just inches away over her coronavirus coverage.

During a lockdown protest at Ohio's Capitol, the woman accused WCMH-TV's Adrienne Robbins of falsifying her reporting on the COVID-19 crisis and refused to back away at the journalist's request.

"I asked this woman to respect my space after she was yelling and spitting in my face," Robbins tweeted afterward. "She said i had no right to social distancing in public and continued to follow me. Complaining about my mask (that is meant to protect her and those around me)."

Doctors recommend wearing masks in public because saliva droplets expelled during speaking can spread the virus, and more droplets are broadcast by shouting -- as the protester was within inches of the reporter's face.

"You know that the company that you work for is lying to the American people, and you know that what you're doing is wrong at the end of the day," the woman shouts, jabbing her finger in the reporter's face. "You know it. You see how nervous you are, you're shaking, you're sweating, your glasses -- you can't even see out of them. You're terrified."

Robbins tries to explain that she's wearing a mask to protect against accidental contamination, and the woman berates her for letting her mask fall beneath her nose.

"You are terrifying the general public, you do realize that," the woman says.

I asked this woman to respect my space after she was yelling and spitting in my face. She said i had no right to so… https://t.co/bmvJbq7ENC
— Adrienne Robbins (@Adrienne Robbins) 1588354016.0

The unidentified woman also berated Cleveland.com's Laura Hogan, who shot the video, and demanded to know her age and whether she was in charge of the outlet's social media.