Bill Barr has an army of over 132,000 federal law officers at his fingertips to snuff out protests: report 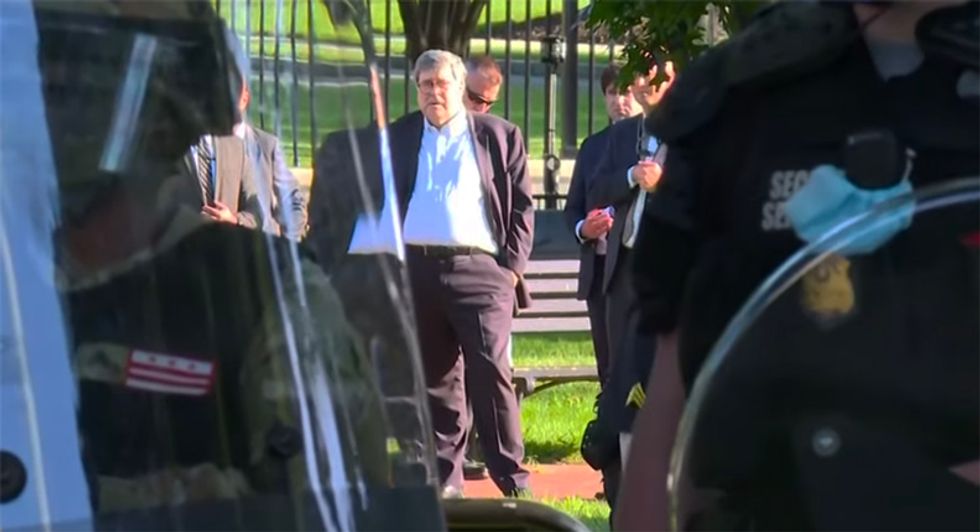 In a deep dive into how Attorney General Bill Barr took control of policing earlier in the week at Lafayette Park so that Donald Trump could have a photo-op in front of historic St. John’s Church, Politico reports that the Justice Department has a veritable army of civilian law officers at the AG's disposal should he wish to quell any more protests.

With questions being raised about who was responsible for the gassing of peaceful protesters just prior to the president's appearance, with Barr eventually taking credit, the report states the hiring of law enforcement at a multitude of Justice Department divisions has exploded in recent years putting the new hires under the attorney general's control.

"Few sights from the nation’s protests in recent days have seemed more dystopian than the appearance of rows of heavily armed riot police around Washington in drab military-style uniforms with no insignia, identifying emblems or name badges. Many of the apparently federal agents have refused to identify which agency they work for," Politico's Garrett Graf wrote. "The images of such heavily armed, military-style men in America’s capital are disconcerting, in part, because absent identifying signs of actual authority the rows of federal officers appear all-but indistinguishable from the open-carrying, white militia members cosplaying as survivalists who have gathered in other recent protests against pandemic stay-at-home orders."

As the author points out the "not-entirely-sensical thicket of agencies that make up the nation’s civilian federal law enforcement, "... has grown well beyond well-known agencies like the FBI and the DEA.

"Nearly all of these agencies are headquartered in and around the capital, making it easy for Attorney General William Barr to enlist them as part of his vast effort to 'flood the zone' in D.C. this week," Graff explained before noting, "As large as the public show of force on D.C.’s streets has turned out to be—Bloomberg reported Thursday that the force includes nearly 3,000 law enforcement—it still represents only a tiny sliver of the government’s armed agents and officers. The government counts up its law enforcement personnel only every eight years, and all told, at last count in 2016, the federal government employed over 132,000 civilian law enforcement officers—only about half of which come from the major “brand name” agencies like the FBI, ATF, Secret Service, DEA and CBP."

To illustrate his [point, he wrote, "In and around D.C., there are more than a score of agency-specific federal police forces, particularly downtown where protests have played out over the past week, nearly every block brings you in contact with a different police force. A morning run around the National Mall and Capitol Hill might see you cross through the jurisdictions of the federal U.S. Capitol Police, the Park Police, the National Gallery of Art police, the Smithsonian Office of Protective Services, the Postal police, Amtrak police, the Bureau of Engraving and Printing police, the Supreme Court police, the Uniformed Division of the Secret Service, the Government Publishing Office police, and the Department of Homeland Security’s Federal Protective Service."

Graff went on to note that, under Barr, the use of federal law enforcement officials has radically changed.

"What is surprising is that those two agencies now facing down Black Lives Matter and crowds protesting systemic racism historically have been enlisted by the federal government to protect blacks against white protesters," he explained. "Attorney General Robert F. Kennedy, for instance, deputized officers from the Border Patrol and the Bureau of Prisons to work as U.S. marshals and secure the University of Mississippi in 1962 to protect James Meredith as he enrolled at the school after desegregation. Similarly, the Border Patrol once watched over the Freedom Riders in Alabama and Mississippi in the 1960s."

According to the report, many of those who can presumably be pressed into protest control, lack training for it.

"More broadly, though, many federal agencies exist with little sustained oversight and continue to struggle with training, recruiting and use of force incidents. The Department of the Interior’s Park Police, one of the agencies that has served as the front ranks of the riot security in Lafayette Park, has long been one of the capital region’s most troubled law enforcement entities, with complaints and questions about its use of force and even a five-year-long lawsuit over the firing of its police chief after she complained about inadequate staffing," the report states.