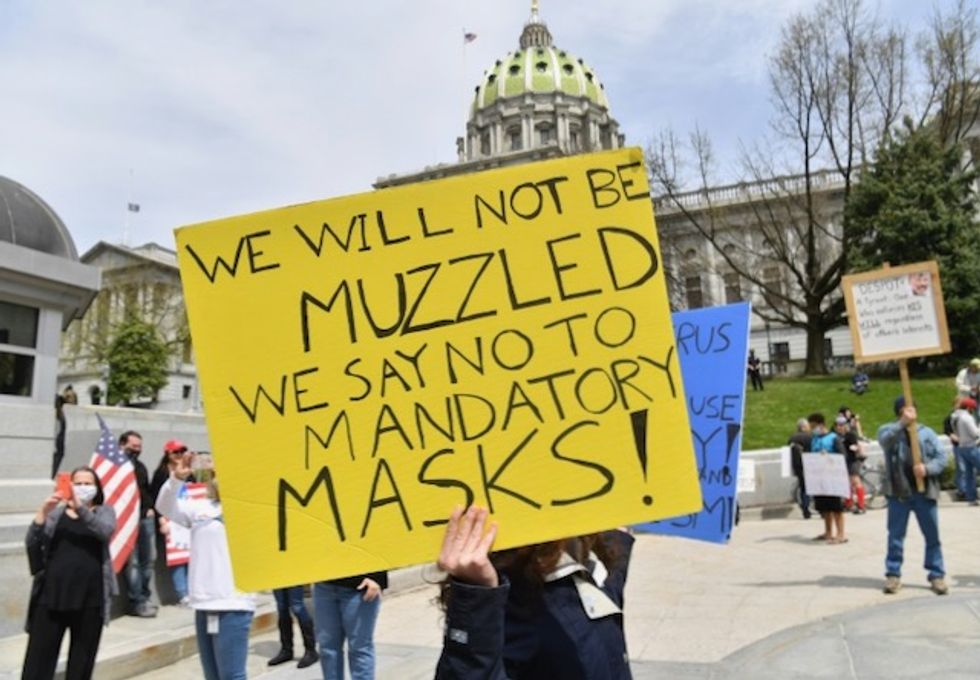 On Tuesday, The Daily Beast profiled Aaron, Chris, and Ben Dorr — a trio of brothers who helped organize some of the COVID-19 anti-lockdown protests around the country, and who in fact have spent years latching onto conservative causes to enrich themselves.

"In April, about a month after COVID-19 lockdowns took effect in the U.S., Reddit users placed the three brothers at the center of an astroturfing campaign against government measures designed to slow the outbreak," reported Brian Freskos and Alain Stephens. "Chris Dorr helped organize a demonstration in the Pennsylvania capital despite official warnings about mass gatherings leading to a surge of infections. Since then, the death toll from coronavirus in Pennsylvania has climbed to more than 6,400. In recent weeks, the brothers sounded alarms about the 'thugs,' 'criminals,' and 'political terrorists' who took to the streets nationwide following the May killing of George Floyd under the knee of a Minneapolis police officer."

The Dorrs were not alone in supporting the lockdown protests. Initially, affiliates of the infamous Koch network contributed to the effort too, but eventually soured on the movement.

According to the report, the Dorrs have been active for years, managing "more than a dozen nonprofits spread around the country, from Wyoming and Wisconsin to North Carolina and Georgia," and raising money to fight conservative bogeymen from gun control to abortion. "At the center of the Dorrs’ efforts is the brothers’ own for-profit consulting firm, which has received huge sums of money from their tax-exempt organizations, fueling allegations that the brothers are deceiving their supporters," continued the report.

"The Dorrs’ affiliated outfits have hauled in millions of dollars over the years, tax returns show," continued the report. "But successes on the fundraising front are belied by waning political clout, as the brothers’ tactics draw increasing fire from across the ideological spectrum. Their enemies denounce them as parasitic gadflies bent on using the latest political zeitgeist and alarmist rhetoric to line their own pockets, sometimes at the expense of causes they claim to support. Some of the biggest criticisms have emanated from the pro-gun community, including the National Rifle Association, which accused Aaron and Chris Dorr of being scam artists."

Ohio nonprofit attorney Scott Hubay told The Daily Beast and The Trace that "instead of spending that money on what they told the public their purpose was, they appear to be using it to enrich themselves."

The Dorrs have vehemently denied these allegations, saying, “The Trace and its affiliated entities have always been tops on the list of the radical Left’s Hate-America fake-news outlets ... We apologize for nothing, and to be attacked by the same socialist, fake-news blogs that hate President Trump means we are doing our jobs fabulously.”