'I'll teach my grandkids to hate you!' Confederate flag-waving Trump supporter freaks out at BLM protesters 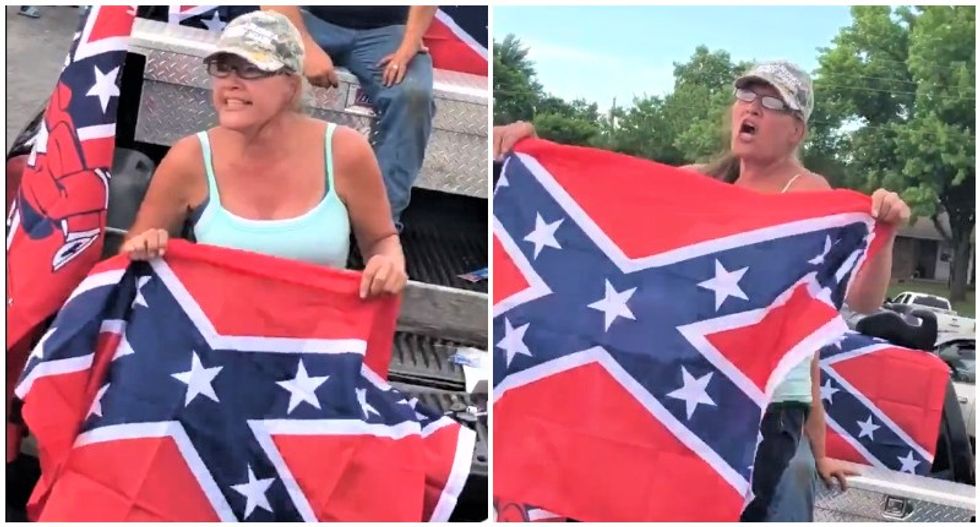 A Trump supporter waving a Confederate flag around was caught on camera this weekend telling a group of Black Lives Matter protesters that she would teach her grandchildren to "hate" them.

The video came from a Black Lives Matter protest that occurred outside of a Confederate memorabilia shop called Dixie Outfitters that's located in Branson, Missouri.

The video starts with a woman wearing a camouflage "Make America Great Again" hat on the back of a pickup truck yelling at people who are protesting outside of Dixie Outfitters.

"I will teach my grandkids to hate you all!" she shouted at the demonstrators.

Then she stood up, brandished the flag in front of the demonstrators, and said, "Suck on this!"

After this, she wrapped the flag around her back like a cape before turning back to the protesters and giving a supportive shout out to the Ku Klux Klan.

Sometimes the racists just come out and show themselves. This woman was part of a counter-protest to a… https://t.co/KjuXh58d4l
— Joshua Potash (@Joshua Potash)1592795539.0