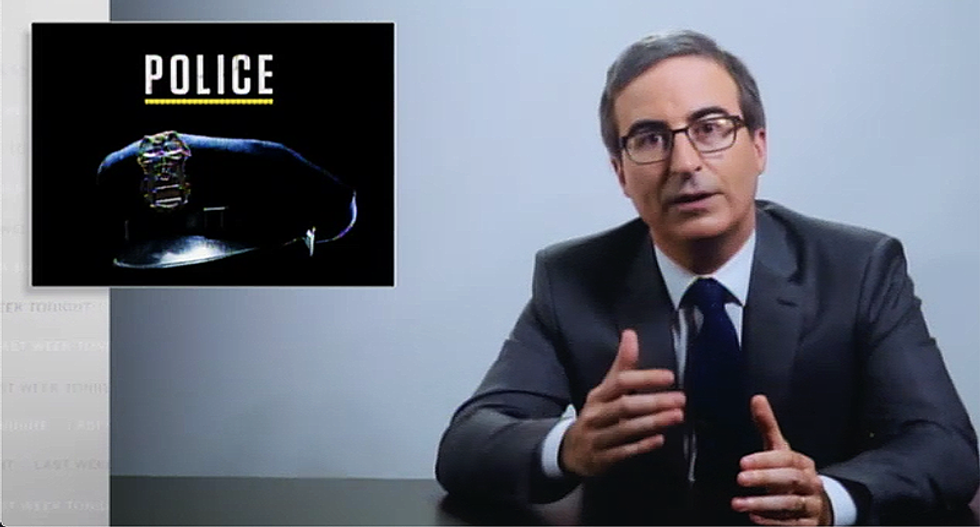 "Last Week Tonight" host John Oliver began his Sunday episode explaining that he would only talk about "one thing" during the episode after the week of peaceful protesters being attacked with military-style tactics at the hands of police.

"Now, as for the president himself," Oliver continued. "He actually hid from the protesters in a bunker, later claiming he wasn't hiding he was actually just 'inspecting it.' Then his attorney general had police gas protesters outside the White House so that Trump could have an inexplicable photo-op at a nearby church while holding up a Bible that, like it's the ticket to the sandwich order that was just called. He also, in announcing job numbers on Friday, invoked George Floyd's name, saying, 'this was a great day for him,' which is utterly f*cking disgusting."

That said, Oliver said it wasn't Trump he wanted to talk about. It's the police.

He started by showing a line of cops that came after a black man shouting at them, pepper-sprayed him, dragged him into the road, and beat him in front of other protesters while they filmed it happening. That wasn't the only example, either. There was footage of cops driving directly into crowds of people and beating people.

"It's genuinely impossible to understate how enraging that is," said Oliver. "They're protesting excessive force by the police, and the police are pepper-spraying them like it's f*cking sunscreen! And that's just one of hundreds and hundreds of videos."

He noted that they were filming the show Saturday morning, so by Sunday night police could have resorted to throwing grenades at protesters while the New York Times posts an op-ed titled "Why we need to bring Hitler back to life as a robot right now." The story was a back-handed knock on the Times for publishing a fascist editorial by Sen. Tom Cotton (R-AR) saying the military should take to the streets to stop American protesters.

Using hard facts, Oliver calls out the Minneapolis police department for their statistics proving they disproportionately go after people of color. For example, they use force against Black people seven times more frequently than they do with Whites. Black Americans are also 2.5 times more likely to be killed by the police than their White counterparts. Finally, Oliver cited that one out of every 1,000 Black men will be killed by police.

Oliver then launched into his full expose, addressing three major topics on police: 1. How the f*ck we got to this point, 2. What the obstacles to reform have been, and 3. What we can do moving forward.

You can see the rest of his analysis in the videos below: