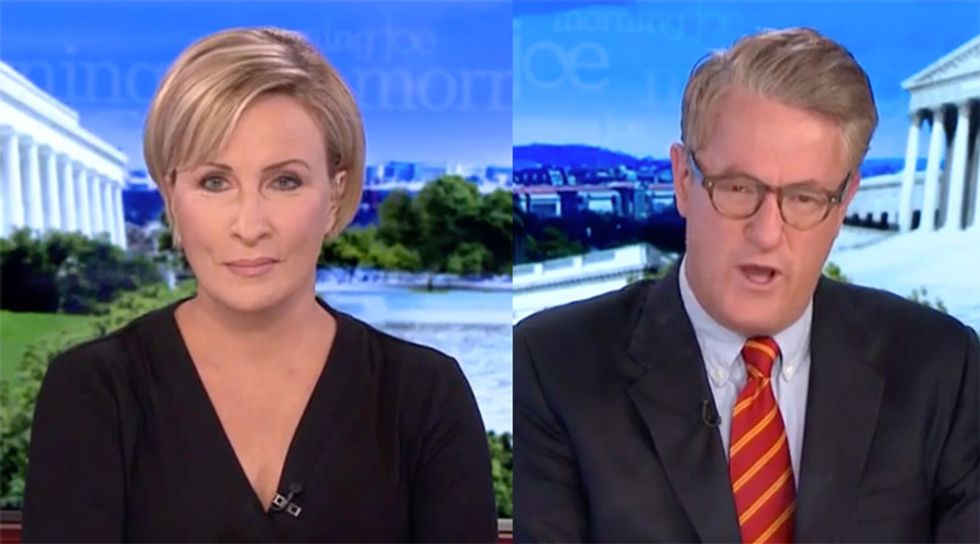 Saying the Donald Trump "fears losing more than he cares about winning," MSNBC's Joe Scarborough suggested the president might step aside rather than go down in a historic defeat in November's election.

With co-host Mika Brzezinski noting several normally Republican states showing the president losing to presumptive Democratic nominee Joe Biden, Scarborough and "Morning Joe" regular Donny Deutsch agreed that -- for the moment -- it appears that the President has given up on trying to win the election.

"Does this guy want to be re-elected?" Scarborough asked. "Does he want to be there? There's nothing logical, I understand, about how Donald Trump acts, but he did know in 2016 when to be quiet, how to operate to at least keep himself in the game. He's not acting that way now. We'll be talking about how he's trying to abolish the Affordable Care Act at the height of, you know, the rise in pandemic deaths at a time when Americans are more scared of their healthcare>

"Even [Texas Republican senators} Ted Cruz and John Cornyn are writing him a letter telling him he can't do that as the Texas governor is telling Texas residents stay at home," he continued. "This is getting worse. It's getting worse in Arizona. It's getting worse in Florida. This guy that you and I have known for many years, he's -- not only is he not acting like he doesn't want to get re-elected, he's acting like he really wants to lose badly and take the Republican Party down with him."

Later in the segment the MSNBC host suggested Trump may attempt to bow out.

Stating the Biden might be the recipient of "375, possibly even 400, electoral votes." Scarborough added. "Donald Trump does not want to carry that around the rest of his life. He wants to carry around the fact that he scored one of the greatest political upsets of all time. He's known when to leave the stage before -- again, I'm the only one saying this -- I would not be surprised if he left the stage again. And again, I'm the only person saying it. Don't think it'll happen, but it's a possibility."