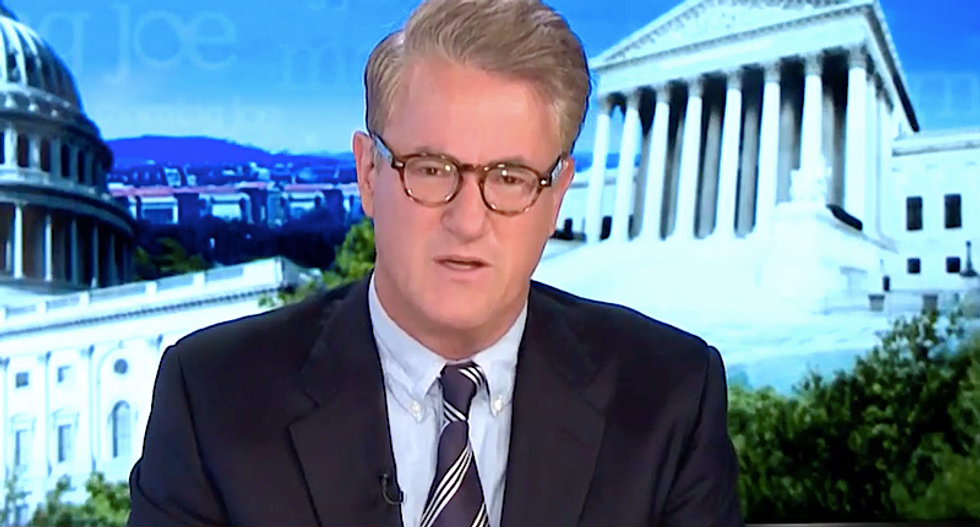 The president has helped turn mask-wearing into a political issue and seemingly worked against widespread testing, and the "Morning Joe" host said polls show Americans are increasingly turning on him.

"The president, he's isolating himself on every issue, 75/25 on the coronavirus," Scarborough said. "Remember the poll about people wanting their kids to go back to school? Here's [Ohio] Gov. [Mike] DeWine's approval rating, 75 percent in Ohio, a state that President Trump is down, and struggling in a state he won easily before."

Cases are on the rise, and spiking dangerously in Texas, where the administration's plan to scale down testing would shut down seven testing sites.

Those decisions and statements are showing up in the polling, Scarborough said.

"We can add Texas and Georgia to the states that are also in danger, because some recent polls have showed that he's tied there," he said. "So I guess the question is, what's the dynamic that's going to change? What dynamic is going to change? How are these numbers going to get any better if he continues to spout out information that's false about the worse pandemic in over 100 years?"

Italy said Monday it had recovered from a Belgian collector hundreds of illegally gathered archeological finds dating as far back as the sixth century BC, worth 11 million euros.

The nearly 800 pieces "of exceptional rarity and inestimable value", including stelae, amphorae and other works, came from clandestine excavations in Apulia in Italy's southeastern tip, according to the Carabinieri police in charge of cultural heritage.

An MSNBC "Morning Joe" panel that was discussing former Vice President Mike Pence being booed by Donald Trump fans during a conservative Christian conference over the weekend led to one regular contributor to point out that it was entirely possible Republicans could blow their chance at regaining power in the 2022 midterms.

Discussing what was described as Trump's "cult," regular Morning Joe contributor Donny Deutsch served up a warning to Republicans that they are at risk of engaging in a "cycle" of losing.

The Trump-backed "audit" of Arizona's 2020 election results is expected to conclude in the coming weeks, and CNN reporter Donie O'Sullivan sees troubling signs that it could spark a fresh round of right-wing violence.

In the latest newsletter for CNN's "Reliable Sources," O'Sullivan thinks that Trump's decision to hype up the audit, which has been widely criticized by elections experts for lacking procedural rigor and integrity, mirrors his decision to hype up the January 6th "Stop the Steal" rally in Washington D.C., which he promised followers would be "wild."