The View grills John Bolton on his refusal to testify in Trump's impeachment: 'Why didn't you step up?' 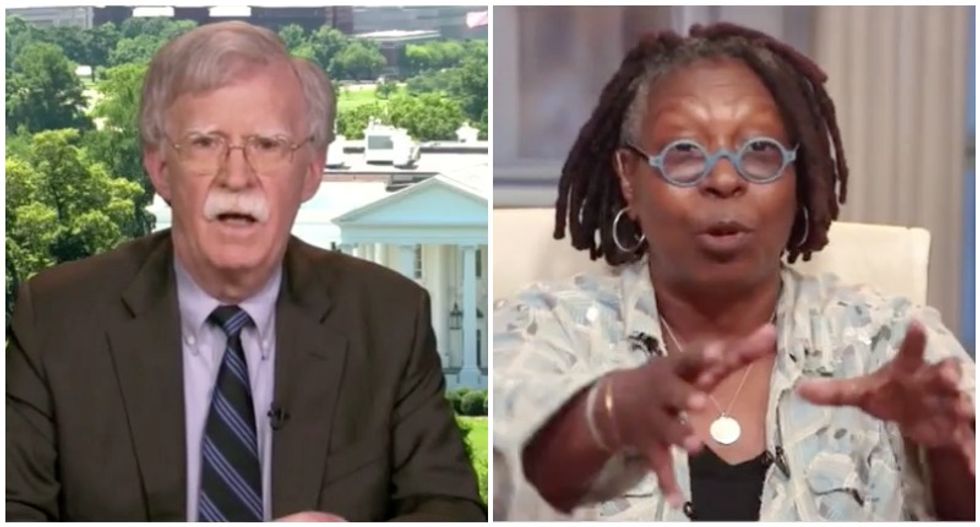 Bolton, who refused to testify in the impeachment inquiry and was not called by the Republican-led Senate, appeared Wednesday on the show to promote his new book about his time in the White House.

"When it comes to Ukraine, you had to say that Trump told you directly that he did not want to send them any military aid until they turned over materials related to [Hillary] Clinton and [Joe] Biden," Hostin said, "and you claimed Trump's true intentions were widely understood, widely understood among White House staffers, the Pentagon and the intelligence community. In fact, you tried eight to 10 times to get him to unfreeze the aid."

"So once and for all, can you tell us whether there was a quid pro quo in your view?" she added.

Bolton, who told the panel that Trump seemed unable to distinguish his own personal interests from U.S. interests, agreed that Trump wanted to use congressionally approved military aid to extract a political favor from Ukraine.

"I think in Trump's mind, the concern he had and Ukraine had absolutely nothing to do with the level of corruption in the country, and there was a lot of corruption and still is," Bolton said. "There's a difference between a reason and a pretext, and for Trump that was a pretext. He believed, and he said it to many people over time, that Ukraine, as he put it one time, tried to take him down in the 2016 election. Now I think that was essentially a fantasy, but he was hearing from people outside the government that that was the case, and what I think evolved is he tried to figure out in his own mind how to try and use this issue with Ukraine."

"He discovered the security assistance and he thought, that might do the trick in order to get investigations of Hillary Clinton and Joe Biden, and that wasn't necessarily revealed simply in the conversation that I mentioned in the book," he added. "I think everybody dealing with the broader Ukraine policy issue as understood it."

Gordon Sondland, the former U.S. ambassador to the European Union, told lawmakers that "everybody was in the loop," and Bolton agreed.

Hostin took Bolton to task for keeping that information to himself before releasing his book, and she blasted him for blaming that failure on House Democrats.

"You knew the impeachment trial was being set up to fail," she said. "You say that the Democrats committed impeachment malpractice, but I think the whole -- everyone who was in power there did this. Everyone did this to the American people, and you knew, and I feel like maybe you didn't think you would have the time to really tell people what was going on."

"Why didn't you step up?" Hostin added.

Bolton defended himself by saying he got that security aid released before leaving the White House in September, and he insisted that nothing he could have told Congress would have changed the outcome.

"I resigned on Sept. 10 and was trying to get my life back in order, and at the time I was focused on the whistleblower and the impeachment investigation, it was clear to me that it had already devolved into a partisan shouting match, and the possibility of Republicans being open to considering impeachment was gone in effect already," Bolton said. "We have had precedent within memory. I remember vividly how to conduct a real impeachment process aimed at getting a president removed from office as opposed to virtue signaling."

Goldberg scolded the former national security adviser before cutting to a commercial break.

"Yes, but John Bolton, the way that most people thought of you, they thought you were the man," Goldberg said. "You could have stood above the fray and said, this is not good."