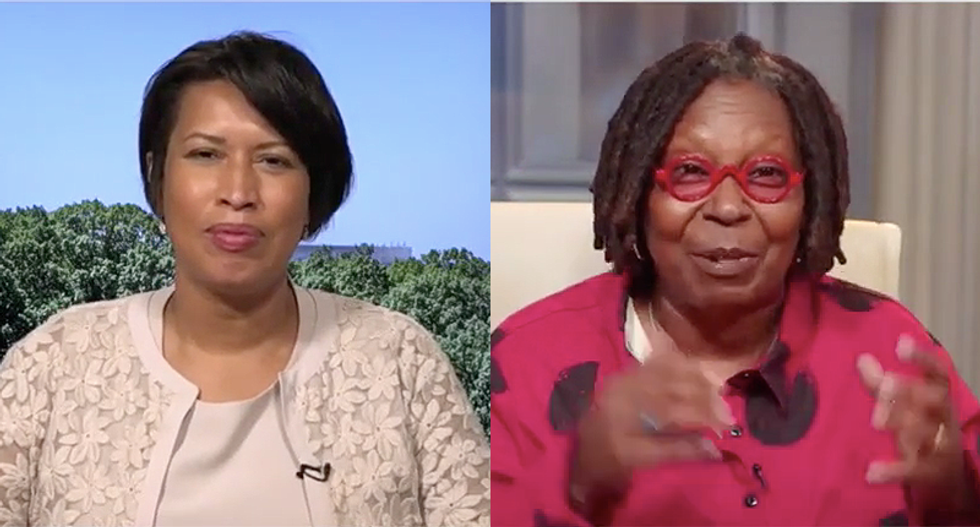 "The View's" co-hosts welcomed Washington, D.C. Mayor Muriel Bowser and noted that President Donald Trump has taken down the fence barring protesters from accessing Lafayette Square and the blocked street in front of the White House typically reserved for visitors and protesters.

It was a tactic that made co-host Whoopi Goldberg chuckle, noting that it made things "too big" for Trump "to ignore."

"You called it -- this is one of my favorite things, 'A night light for you-know-who,'" said Goldberg, talking about Trump without saying his name. "Now since he's sent troops in your city hall, he has taken down the fencing surrounding the White House. Do you think he got your message?"

Bowser said she certainly hoped he did.

"I think what we saw from this president is something that we haven't seen in our city, and that was federal troops on the ready, federal police, policing a local city, National Guard troops hauled in from all over the country, and we saw peaceful protesters attacked by the federal government, and that should never happen," said Bowser. "So, I decided when we saw those federal police out on D.C. streets that we had to push back. We had to make this area an area for peaceful protests, and for an affirming message. At this time, right now, that says we have to have more justice and more peace and fairness in policing."

Joy Behar noted that Bowser had previously told reporters that she had no warning about the clash between peaceful protesters and the White House. She asked if it was hard to run the city on "Trump's turf."

"Well, it's our home turf. I was born and raised here," said Bowser. "We're more than the federal government, more than the White House and the capital. We're 700,000 Americans who live here, who pay taxes here, who raise children here, and we want every right that every American has [other than voting representation in the House and Senate]. And that's why we're fighting for statehood. It's only through statehood, by D.C. becoming the 51st state that we can prevent Donald Trump or any president from encroaching on the autonomy of American citizens in Washington, D.C."