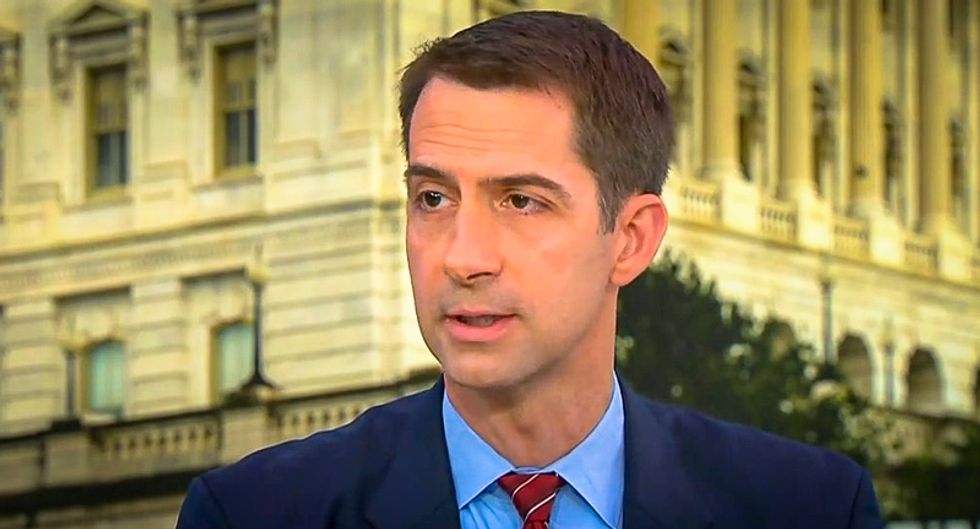 Sen. Tom Cotton (R-AR) appears to suddenly be supporting Black Lives Matter and the memory of George Floyd. The move comes after Cotton was attacked for his tweet saying the military should not "quarter" protesters.

Sen. Tom Cotton suggests "no quarter" for rioters and looters. Historically, it means you kill people rather than… https://t.co/BYMuPeuoUO
— Lis Power (@Lis Power) 1591026860.0

The Arkansas senator then wrote a controversial op-ed in the New York Times expanding on the thought, saying that the military should be sent into the streets as if the protests were a war.

“These rioters, if not subdued, not only will destroy the livelihoods of law-abiding citizens but will also take more innocent lives,” wrote Cotton. “One thing above all else will restore order to our streets: an overwhelming show of force to disperse, detain and ultimately deter lawbreakers. But local law enforcement in some cities desperately needs backup, while delusional politicians in other cities refuse to do what’s necessary to uphold the rule of law.”

The editor who published the op-ed was driven from the Times, being forced to resign his position. Other Republicans have also come out against his stance, including conservative Sen. Lindsey Graham (R-SC).

“I think it’s a bad idea. I think it should be used as a last resort. The first line of defense is civilian cops then the National Guard, then as a last resort: the military,” said Graham in a comment to CNN's Manu Raju.

Politico's Jake Sherman tweeted that Cotton spoke out for justice for people with color on Tuesday.

"Young black men have a very different experience with law enforcement in this nation than white people and that’s their impression and experience and we need to be sensitive to that and do all we can to change it," said Cotton.

His colleague, Tim Alberta, noted how quickly things changed for Cotton, who seems to have discovered racism is real. The senator told Alberta last week: “No, I do not think you can paint with a broad brush and say there’s systemic racism in the criminal justice system in America."

"The politics of racial justice are changing by the minute, before our very eyes," tweeted Alberta.

But now Cotton is trying to change the narrative, pushing a bill “for Justice for George Floyd." At the same time, the bill opposes any effort to defund the police.

Read the letter below: