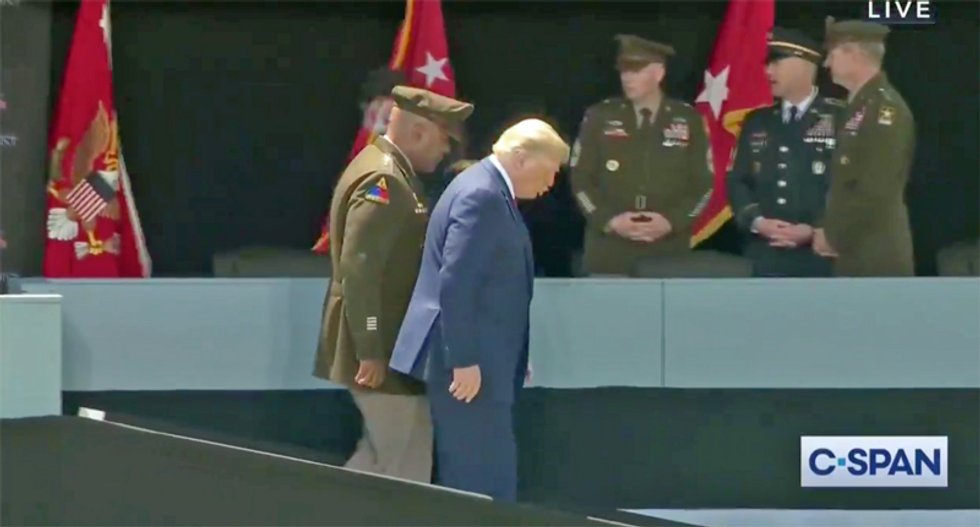 In a new interview with The Wall Street Journal, President Donald Trump went out of his way, unprompted, to defend himself for struggling to walk down a ramp after the commencement address at West Point, a moment that led to widespread mockery and speculation about his physical health.

"So I’m going to go real easy. So I did. And then the last 10 feet I ran down," said Trump. "They always stop it just before I ran, they always stop it. So, I spent three hours between speeches and saluting people and they end up, all they talked about is ramp … If you would have seen this ramp, it was like an ice skating rink. So I’m the only one that can happen."

"I mean, here I spent three hours on stage, the sun pouring in and I saluted 1,106 cadets, and that’s not easy," Trump added. "Even the general said, That’s amazing. Other presidents would never have been able to do it. Because usually they do the first 10. They do 10 honor rolls, and then they go home. I stayed there for hours. And what do I do? I get publicity about walking down a ramp. And does he have Parkinson’s? I don’t think so."

Last week, Trump similarly complained that going down the ramp was harder than the mainstream media made it look like, saying it was "long and steep." Footage exists of former Vice President Joe Biden walking gracefully up a similar ramp at a former West Point ceremony.