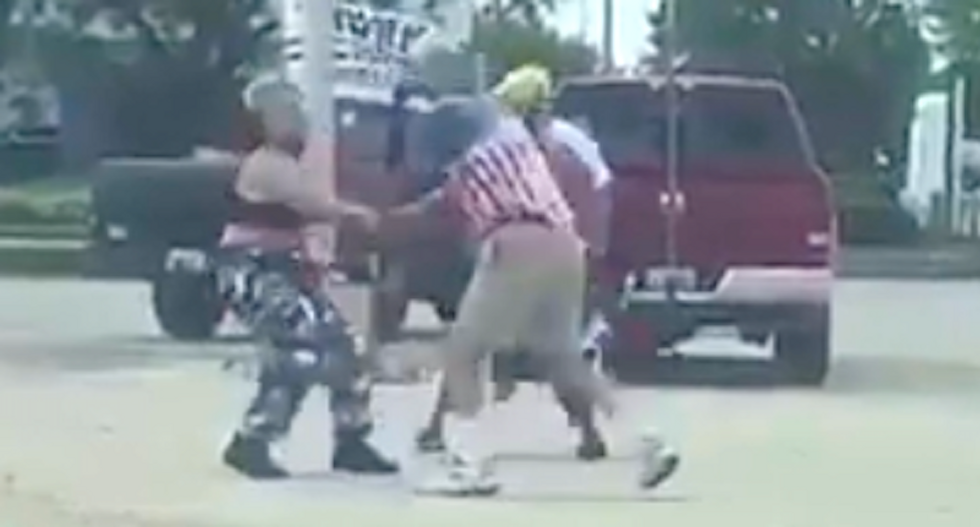 A Trump supporter claims he's the victim after whacking two teenage Illinois sisters with a flagpole during a Black Lives Matter protest.

Sisters Rhiannon Woods, 17, and Gabriella Woods, 15, were marching in support of civil rights Monday in Joliet when Robert Tracy and another man standing nearby insulted them and mocked their signs, reported The Herald-News.

The older girl then snatched a Trump flag from Tracy's truck, from which he'd been selling signs supporting President Donald Trump near the protests, to take a selfie photo, and she said the flag pole broke off when the vendor drove away.

“All I wanted was my flag back," Tracy said. "That’s all I wanted."

But Rhiannon Woods said Tracy jumped out of his vehicle screaming and struck her with the flag pole, and she said the man then spit on them.

"It's not justified over a piece of fabric," she said.

The girls refused to talk to police without their mother because they're minors, and their mother took Rhiannon Woods to a nearby hospital for treatment of bruises from the flag pole.

Tracy insists he never attacked or insulted the girls, although video shows him whacking the teen in the abdomen before they struggle over the flag pole, and he said a police squad car now stands guard outside his home for protection.

“I am now on a hit list," he said. "My house is going to burn down tomorrow."