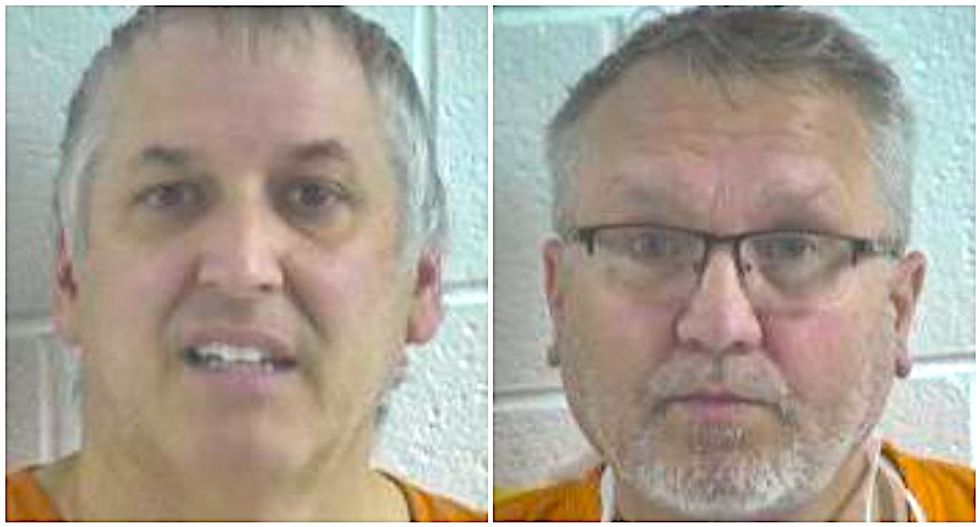 Two white Kentucky men were arrested after one of them pepper-sprayed police officers and demonstrators and the other pointed a gun at protesters.

More than 50 demonstrators marched Tuesday evening from a statue honoring Robert E. Lee outside the Calloway County Courthouse with a police escort through the streets of Murray, holding signs protesting the police killings of George Floyd and Breonna Taylor, reported WKYU-FM.

Less than an hour into the march, officers arrested 55-year-old John Dickerson, of Paducah, on wanton endangerment charges after he pointed a gun at protesters.

Then a second man, 53-year-old David Fryemire, also of Paducah, blasted protesters and five officers at close range with some type of chemical irritant from his car, and then tried to drive into the crowd before he was stopped by police.

“When we started coming up on his car, he had a gun pushed up against his chest,” one woman told the campus radio station. “We all went back and gathered around his car, and then he pulled out pepper spray.”

Protesters reported feeling nauseated and extreme burning sensations, leading some of them to suspect the chemical was bear spray -- which measures at about 2 million Scoville units.

The woman said she, her girlfriend and her dog were directly sprayed, and she said the dog rolled on the ground and cried for hours.

“My eyes swelled shut. We couldn’t see to get out of the road,” she said. “It felt like our skin was on fire for hours.”

The demonstration ended back at the Confederate memorial, which Murray State assistant football coach Sherman Neal II called to remove in an open letter published the day before.