The United States isn’t the only country debating Confederate symbols.

The Confederate flag can be seen flying in Ireland, Germany, Brazil and beyond. Sometimes, the red-white-and-blue-crossed flag is seemingly displayed as kitsch, a kind of Americana. Other times, its display conveys a political meaning more reflective of the flag’s origins in the slave-holding, Southern American republic.

Wherever the Confederacy crops up, controversy usually follows. My academic research as a cultural geographer traces how Confederate iconography gets stitched into the cultural fabric of places thousands of miles from the United States.

In the city of Cork, Ireland, fans of the local hurling and soccer teams have long flown the Confederate flag, which is sometimes called the “rebel flag,” from the stands. Both teams are called “The Rebels,” and their team colors match those of the Confederate flag.

After NASCAR banned Confederate flags at its racing courses in June, a Gaelic Athletic Association administrator announced that it would ban the flag at Cork soccer games, too. Some Cork Rebels fans had already soured on the flag. In 2017 a defender of Confederate statues killed anti-racism activist Heather Heyer in Charlottesville, Virginia, cementing for many the flag’s association with white supremacy.

But the Red Hand Defenders, a right-wing paramilitary organization in Ireland, still brandishes the Confederate flag because of its potent political symbolism.

The Protestant hardliner group emerged in the Ulster region in 1998 to oppose Northern Ireland’s possible secession from the United Kingdom and reunification with Ireland. To thwart this “home rule” campaign, the Red Hand Defenders executed a series of deadly bombings and in 1999 killed the Catholic human rights lawyer Rosemary Nelson.

Ireland’s connection with the Confederacy dates back to the Civil War. Many of the Confederate generals whose statues dot the U.S. South, including Stonewall Jackson and Robert E. Lee, were Scots-Irish. Their families came from Ulster, which includes parts of both Ireland and Northern Ireland.

In a 2008 post called “War of Northern Aggression,” the Belfast-based photography website Extra Mural Activity featured some murals in the Ulster region, including one celebrating the Ulster heritage of Generals Lee and Jackson.

“The Confederate attempt to secede from the union is put in parallel with loyalist resistance to Home Rule,” it explains.

Like Ireland, Brazil has an ancestral connection to the American Confederacy.

After the Civil War ended slavery in the United States, some 8,000 to 10,000 Confederate soldiers left the vanquished South and migrated to Brazil. There, farmland was cheap and slavery was still legal. Historical research suggests that as many as 50 Confederate families purchased over 500 enslaved Black people in Brazil.

Today, the descendants of these “Confederados,” as the Americans came to be known in Portuguese, hold an annual festival in São Paulo state celebrating their heritage. Dancers clad in antebellum and Civil War attire square dance to American country music on an enormous stage emblazoned with the Confederate flag while visitors enjoy Southern fried chicken and biscuits and purchase Confederacy-themed souvenirs.

The festival, held in the Protestant cemetery where many original Confederate settlers were buried back when Brazil was predominantly Catholic, began in 1980. Since the 2017 killing in Charlottesville, the Confederados’ event has met resistance from Black Brazilians, who find its romanticization of the slaveholding South and its Confederate iconography disturbing. 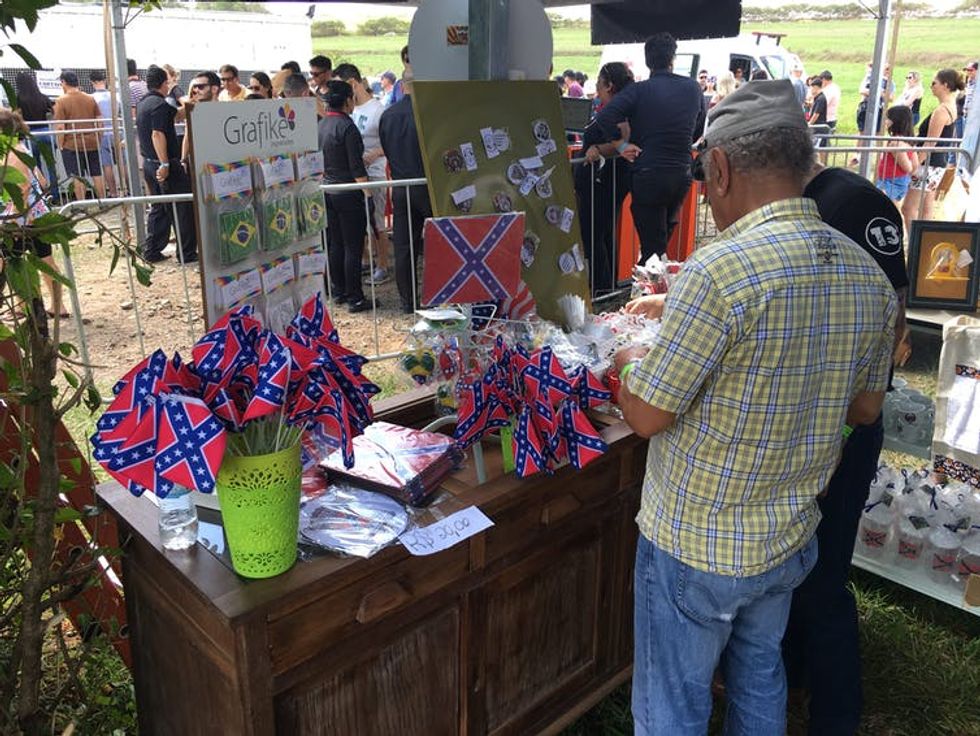 Confederate iconography sold on miniature flags, buttons and mousepads at the 2019 ‘Festa Confederada.’

For Neo-Nazis in Germany, the white supremacy embedded in Confederate iconography is useful. It’s a stand-in for the Nazi swastika, which has been banned in Germany since the Holocaust. And during Civil War reenactments in Germany, Germans who side with the South are often acting out “Nazi fantasies of racial superiority,” Wolfgang Hochbruck, professor of American Studies at the University of Freiburg, told The Atlantic in 2011.

In those situations, the Germans flying the Confederate flag clearly understand its historic origins and meaning. That’s not always the case. A Confederate flag spontaneously appeared in the crowd at the fall of the Berlin Wall in 1989, for example.

There, it may have been understood as a symbol of anti-communism. A recent study shows that German schools, like many in the United States, teach the Civil War as primarily a battle over Southern states’ desire to remain “free” from federal interference – not over their desire to preserve slavery.

Historians have debunked this “states rights” theory of the conflict. But many in Germany may still view the flag as a symbol of freedom or independence.

Sometimes, people in Germany and elsewhere seem to see the Confederate flag as simply part of American culture. The Confederate iconography spotted at a country music festival in Geiselwind in 2007, for example, was probably seen as kitsch. 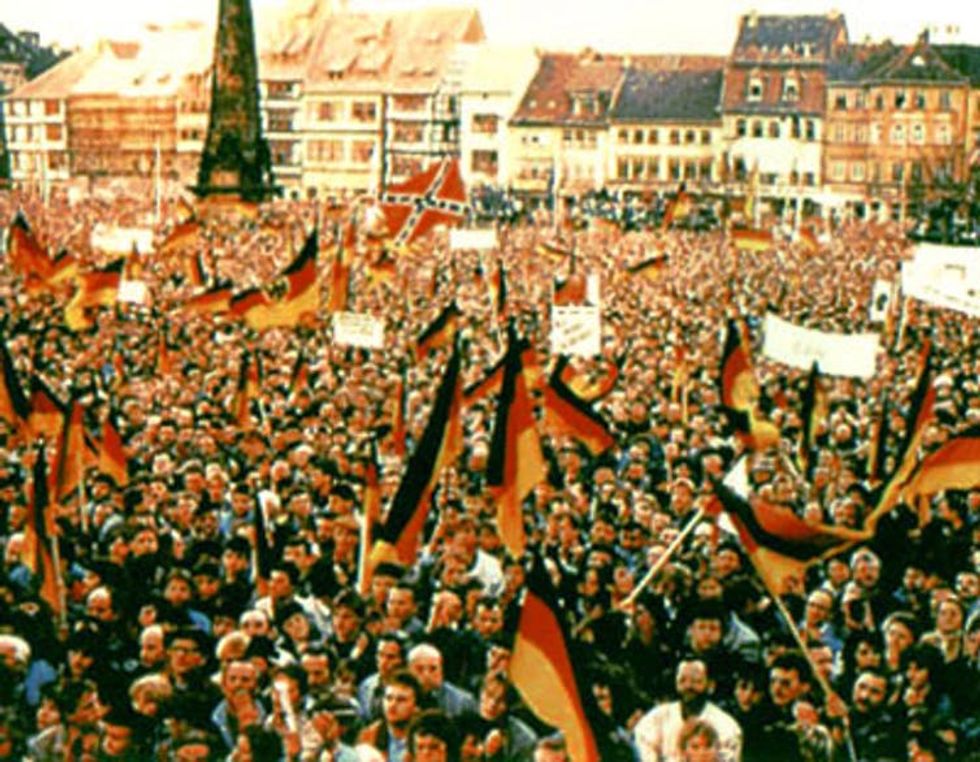 Confederate flag among German flags as the Berlin Wall crumbled in 1989.

Though Confederate iconography takes on different meanings in other countries, research shows it often crops up along those countries’ own political fractures, religious conflicts and racial divides. Flying it tends to inflame simmering social tensions, reopen old wounds and spur debates about history like those underway in the United States.

For Americans, who are almost evenly split on whether the Confederacy represents racism, the Confederate flag is today an unmistakable signal of a deeply divided society. Fifty-two percent say they support removing Confederate monuments from public space.

That’s up 19 percentage points since 2017, when modern blood was shed over the 19th-century Confederacy. Charlottesville has forced people everywhere to contend with both the historic reality of the American South and, increasingly, its surprisingly worldwide 21st-century legacy.