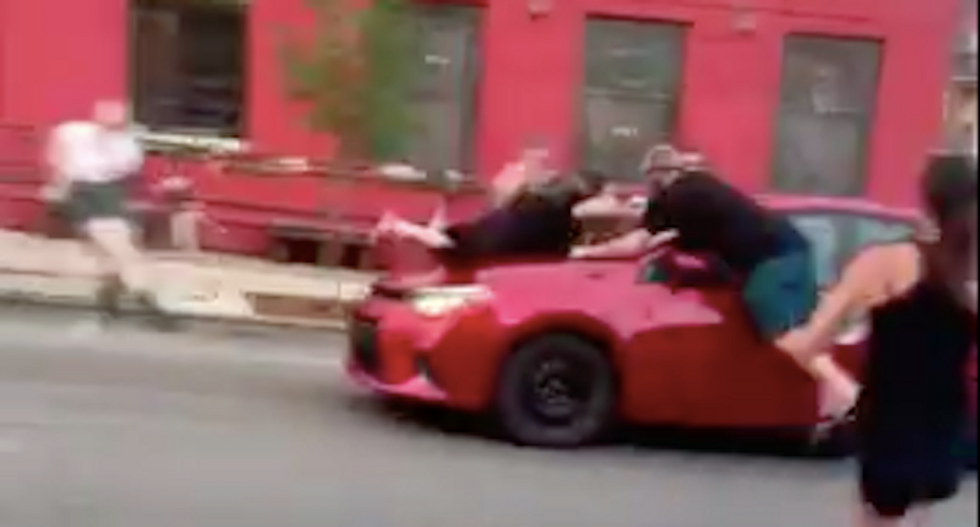 A driver struck two protesters in Indiana during a demonstration against the attempted lynching of a local civil rights activist.

Vauhxx Booker, a Bloomington human rights commissioner, was claims he was attacked by a group of white men and women July 4 while camping at nearby Lake Monroe, and protesters took to the streets to demand charges against the assailants, reported The Bloomingtonian.

Portions of the incident were witnessed by passersby and recorded on video, and the Law Enforcement Division of The Indiana Department of Natural Resources confirmed its officers responded to the attack but have not yet made any arrests.

“The incident is under investigation and the final report will be forwarded to the Monroe County Prosecutor’s Officer upon completion,” said Capt. Jet Quillen.

The 36-year-old Booker was hoping the prosecutor would issue warrants for the assailants' arrest, and he called on the DNR to discipline the officers who responded to the attack.

“They refused to make an arrest,” Booker told the newspaper.

The protest drew a violent response to the driver of a red car that was seen intentionally ramming a woman who was marching in a downtown street, and a man appeared to jump onto the car in an apparent effort to help the woman or stop the driver, reported WTTV-TV.

Both the man and woman ended up on the hood of the red Mazda, and the driver then accelerated and turned, sending the pair flying.

A separate video showed a white man wearing a face covering jump out of the passenger side door to move a rental scooter from the car's path.

Demonstrators were able to identify the license plate on the back of the car, but the driver was not immediately arrested.

The woman was hospitalized, but no additional information was available about her condition.

One of Booker's friends posted audio of the DNR officers' response on Facebook, and they can be heard identifying themselves as Kurt Kinser and Tim Beaver.

One of the officers said accounts of the attack were "conflicting," and they told Booker they couldn't arrest his assailants if they were protecting private property, but Booker and his friend insist the attack took place on public land.

“There’s nothing to indicate that from what we saw,” an officer says. “We’ve done the investigation and talked to both sides. We talked to the prosecutor about it.”

Booker's friend, Max Xam, said they had discussed racism and camping shortly before the attack.

“Vauhxx said that Black people don’t go into the forest and camping because they fear for their lives,” Xam said. “He told his sisters he was going, and they didn’t believe him.”