'Infuriated' Justice Alito battled with Gorsuch behind the scenes as he sided with liberals in major LGBTQ case: report 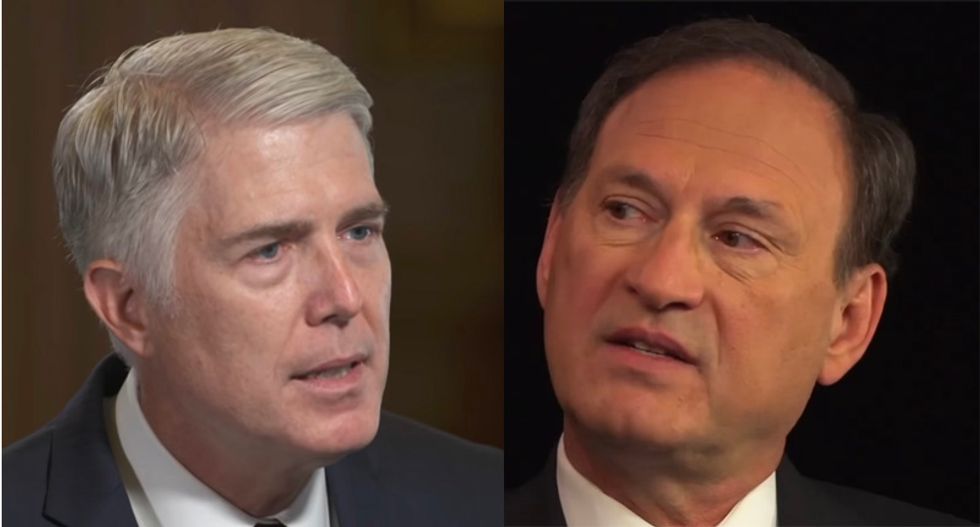 According to an exclusive report from CNN, Supreme Court Justice Samuel Alito was furious with fellow conservative jurist Neil Gorsuch for siding with liberals on a key case that extended protections to gay and lesbian workers while also protecting transgender employees in a major June ruling.

In a column for CNN, Joan Biskupic, who covers the Supreme Court for the network said the ruling, which extended anti-bias coverage for 1 million transgender workers by a 6-3 decision, was riddled with infighting, leaks and unlikely alliances usually unknown in a court known for secrecy in its deliberations.

In particular, the court was wracked by a battle between Alito and Gorsuch, who was reportedly being guided by Justice Elena Kagan as he wrote the majority decision.

Noting that Chief Justice John Roberts assigned the writing of the majority decision to Gorsuch based upon his interest in sticking close to the text of laws, the report said back and forth between the justices who were forced to work from home due to the coronavirus pandemic grew contentious as Alito raised objections as he wrote a scathing dissent.

After pointing out that, "During the drafting process, individual justices may break off to write separate concurring statements," Biskupic explained that Alito was "infuriated' after seeing an early draft of the majority opinion written by Gorsuch, causing him to let his colleagues know he would be writing a dissent.

Not everyone on his side of the dissenting opinion agreed with his attack.

"Justices Clarence Thomas and Brett Kavanaugh, Trump's second appointee, also believed Gorsuch was flat wrong about the scope of Title VII coverage. Congress could change the law if it thought additional protections were warranted, they contended," Biscupik wrote. "Thomas, the senior member of that conservative team, had tried subtly to persuade Gorsuch that he was not being true to conservative textualism, but to no avail."

Explaining that Alito refused to be moved, the report states, "He believed Gorsuch's stance contradicted his own oft-expressed view that judges should avoid policy decisions. Alito finished his first draft after the justices had retreated to their homes because of the Covid-19 pandemic and sent around copies of his dissenting opinion in April, CNN has learned," before adding, "Alito was especially angered by Gorsuch's view that he was taking a modest, humble approach to the law, as his dissenting opinion made clear," which Thomas agreed with while Justice Brett Kavanaugh was uneasy with the tone of the dissent, choosing instead to write his own separate one.

"Alito was scoffing at what he regarded as Gorsuch's phony attempt at the Scalia brand of textualism," the report continued. "'(N)o one should be fooled,' Alito wrote in his final opinion. 'The Court's opinion is like a pirate ship. It sails under a textualist flag, but what it actually represents is a theory of statutory interpretation that Justice Scalia excoriated -- the theory that courts should 'up-date' old statutes so that they better reflect the current values of society.'"

"The six-justice majority held to its view that Title VII covered gay and transgender workers without exception. None of the liberal justices nor Roberts was writing a separate opinion, as often happens in contentious cases. Here, the majority would speak with one voice: Gorsuch's." she concluded.

You can read more about the legal wrangling here.