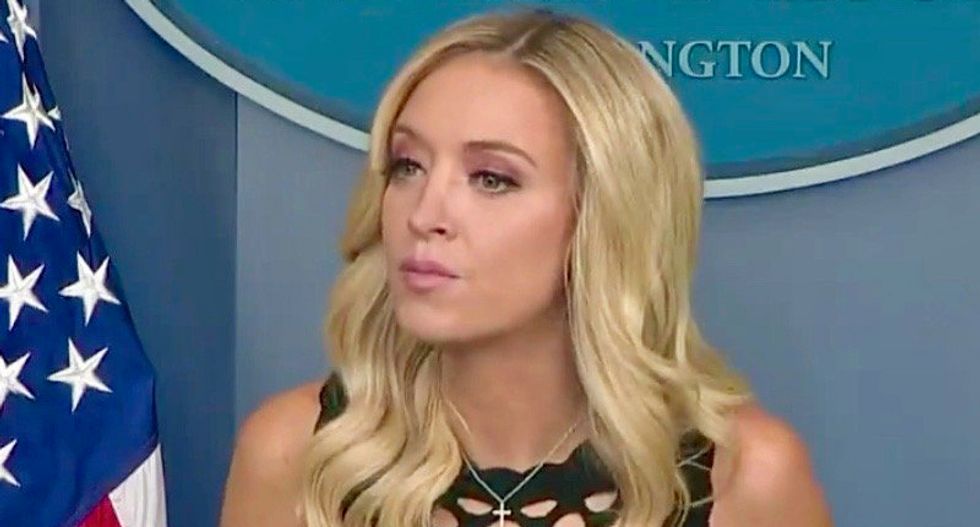 In a report on Kayleigh McEnany's tenure as White House press secretary at Politico, critics took special notice of her refusal to give straight answers about Donald Trump and turning every inquiry back on reporters in the form of attacking the media for even asking.

Using the press secretary's contentious Tuesday press conference where she dismissed press attempts to get to the bottom of the Russian bounty reports, and what the president knows about it, as a springboard, Politico found critics who called McEnany out for her deflections and distractions.

Noting that her "series of statements didn’t address the veracity of the reports," the report by Politico's Meredith McGraw went on to add, "It’s become standard operating procedure for the White House: Redirect attention to the media when pressed about Trump’s knowledge of — and response to — various threats. When the administration was grilled earlier this year about when Trump first learned about the coronavirus, the White House said it was the press — not Trump — that had downplayed the outbreak’s severity. The tactic has had the effect of distracting from the intelligence itself. Yet it has also inadvertently revealed how intelligence gets from the ground to the president’s desk."

According to attorney Mark Zaid, who represented some of the whistleblowers who set in motion the president's impeachment inquiry, McEnany has no intention of being truthful and is always on the lookout for a distraction.

“It’s a deflection — it’s like yelling squirrel — they’re not addressing what the underlying substance is, they’re trying to point to the shiny object in the corner,” he explained. "The White House has only made it worse by their deflection because it’s turned the whole situation upside down so the underbelly is exposed.”

According to a report from the Washington Post, McEnany has also perfected the art of the "scripted walk-off."

Noting that she has repeatedly delivered an attack on the media to close her briefings before slamming her binder of prepared answers closed and then fleeing the podium, the Post called it theater designed to please her boss and his rabid followers.

"Such dramatic exits have become a signature of McEnany’s brief tenure as press secretary. Since taking the job in April, the former Trump-friendly CNN pundit and spokeswoman for Trump’s reelection campaign has often waited until the briefing’s conclusion — that is, the moment when she determines the briefing is concluded — to unload on the assembled reporters," the Post reports.

According to Jennifer Mercieca, an associate professor at Texas A&M who specializes in rhetoric, McEnany's abrupt departures are an example of “leave-taking behavior,” adding, the press secretary's stunts are designed to demonstrate “how adversarial the relationship between the press secretary and the press is at present. The abrupt ending signals a lack of respect for the press, especially after she has berated their reporting."