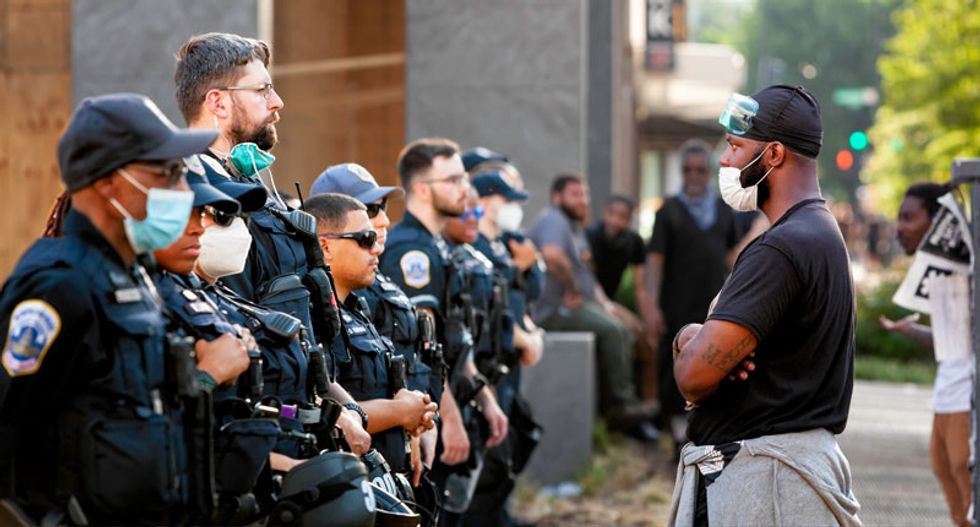 Monahan is coming under fire after the park police was caught using tear gas on peaceful protesters. While some antagonists threw water bottles over the fence at police, protesters had been good about stopping those individuals and working to ensure the protests were calm. Reporters with cameras were on hand observing the protesters as the Park Police advanced on horseback.

"An Army National Guard officer who also testified on Tuesday as part of the House Natural Resources Committee’s investigation of the clash said the Park Police subjected protesters to 'excessive use of force,'" the report explained.

But Monahan swore his officers were attacked with “severe violence from a large group of bad actors” and that the response “centered around public safety.”

Second-by-second, the videos of the siege on Lafayette Square we examined, none of them confirm an attack of "severe violence from a large group." Finally, after being pressed, Monahan backed down.

Rep. Mike Levin (D-CA) showed the video of the protesters and reporters racing away from the police in riot gear before they attacked an Australian news crew, punching and hitting both the reporter and the cameraman and beating a reporter in the back with a truncheon as she tried to run away.

“The officers you saw in those clips, were they surging against the crowd and assaulting a news crew, yes or no?” asked Levin.

“The video shows a moment in time,” said Monahan, claiming it he didn't want to comment because it's part of an ongoing investigation.

In wake of the siege, officials tried to claim that they announced multiple times that they were clearing the square. But Rep. Jared Huffman (D-CA) played a clip of the so-called announcement.

“You must have superhuman hearing, because I don’t think any of us could hear it,” said Huffman.

Monahan went on to call the protest "one of the most violent protests that I’ve been a part of in my 23 years."

The Times reported that he "described what he called the 'unprecedented and sustained nature of violence and destruction”'in which demonstrators lobbed fireworks, bricks and planks of wood at the police. He told lawmakers that 50 of his officers were injured in the protests in front of the White House, though he acknowledged that one officer was harmed on June 1, and not until after the crackdown began."

“From my observation, those demonstrators — our fellow American citizens — were engaged in the peaceful expression of their First Amendment rights,” said Maj. Adam DeMarco, an Iraq war veteran who serves in the District of Columbia National Guard. He testified “Yet they were subjected to an unprovoked escalation and excessive use of force.”

In response to DeMarco's comments, Attorney General Bill Barr testified that DeMarco had nothing to do with the "planning" for the siege on the square. He was asked whether DeMarco's account was correct.