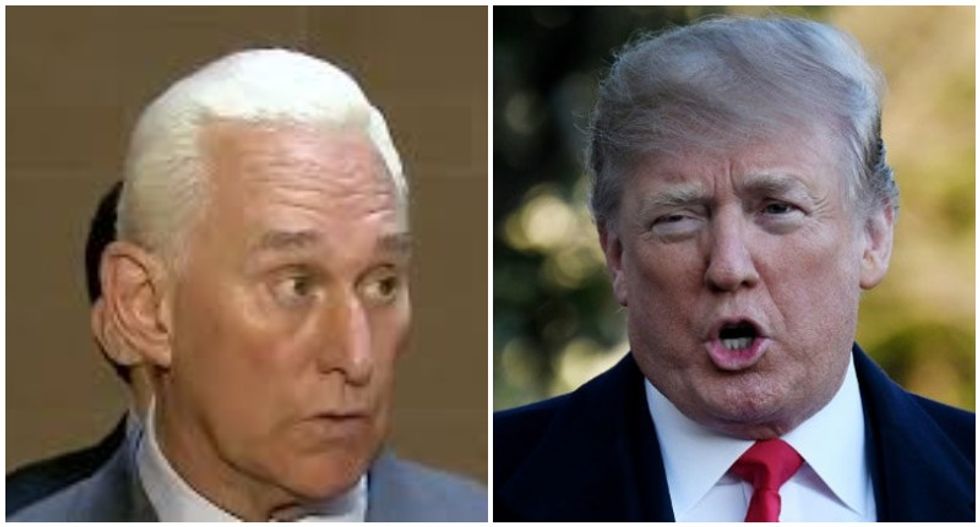 President Donald Trump is facing pressure from outside allies to keep Roger Stone out of prison, but White House officials and campaign aides are begging him not to intervene.

The longtime Republican operative was convicted in November on seven counts, including witness tampering and lying to investigators, and Trump allies are split over the president taking action to keep him from serving a 40-month sentence imposed by a judge, reported Politico.

“Roger Stone should not disproportionately bear the burden of the corrupt [Robert] Mueller investigation,” Rep. Matt Gaetz (R-FL) tweeted Wednesday, a day after predicting Stone would not go to prison. “No he is not.”

Trump advisers have been wishing the problem would just go away, hoping the president will let Stone begin his sentence and then issue a pardon after the election.

Two sources told Politico that Jared Kushner, the president's son-in-law and senior adviser, favors commutation -- which would keep Stone out of prison without wiping his record clean -- and many close to the White House believe that's how Trump could split the difference in the case.

“It is correct that the option has been discussed, yes,” said one senior administration official. “The counter-argument is, if a pardon is warranted, a pardon is warranted. You don’t tailor a legal decision based on reaction from Democrats when they will criticize anyway.”

Barr said this week he believes the 40-month sentence is fair, but many who know both Trump and Stone believe the president will reward his friend's loyalty and silence -- and send a message to the Department of Justice and congressional Democrats.

“The president wants to look strong," said one Trump adviser. "He can’t get rolled by DOJ."