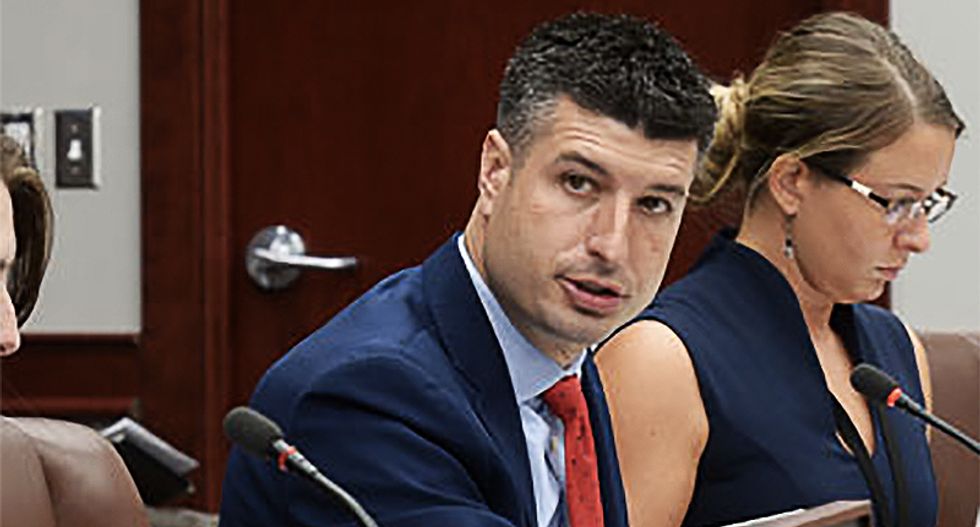 A Michigan Republican gathered with dozens of supporters -- few of whom were wearing masks or observing social distancing guidelines -- before he tested positive for the coronavirus.

State Sen. Tom Barrett (R-Charlotte) was among those not wearing a face covering at a July 18 petition drive in Eaton County, where hundreds came out to protest coronavirus restrictions implemented by Democratic Gov. Gretchen Whitmer, reported Bridge Michigan.

The GOP lawmaker tested positive for the coronavirus on July 31, although public health officials have not linked any COVID-19 cases to the event at Sharp Park.

"I have done my best to make contact with those I have been around in the past couple weeks so that they may also seek medical advice," said Barrett, a member of the Michigan National Guard.

He experienced mild fatigue and joint pain two days before his test, but he has not suffered additional symptoms since then and remains under home isolation.

"[It has been a] crazy disruption of my life and my family and the Army and everything," Barrett told Bridge.

Barrett helped gather 580 signatures from residents of 21 Michigan counties, although those were collected over the course of about six hours and photos obtained by Bridge show about two dozen people at the event at one time.

One photo shows Barrett shaking hands with an elderly man, despite social distancing mandates, and only one person wearing a mask.

"[It's] totally irresponsible to be gathering in groups without masks, shaking hands, sharing pens, swapping petitions and clipboards during a major pandemic where thousands of people have died," said Mark Fisk, spokesperson for the Keep Michigan Safe committee that formed to oppose the petition drive.

Residents were required to wear masks in indoor public spaces or outdoors when unable to maintain six feet distance from others, according to a July 13 executive order by Whitmer.

Whitmer herself has attended at least two large outdoor gatherings in recent months, although she wore a mask in each case.

The petition seeks to repeal a 1945 law Whitmer has used to extend an ongoing state of emergency and require legislative approval after 28 days of the initial declaration.