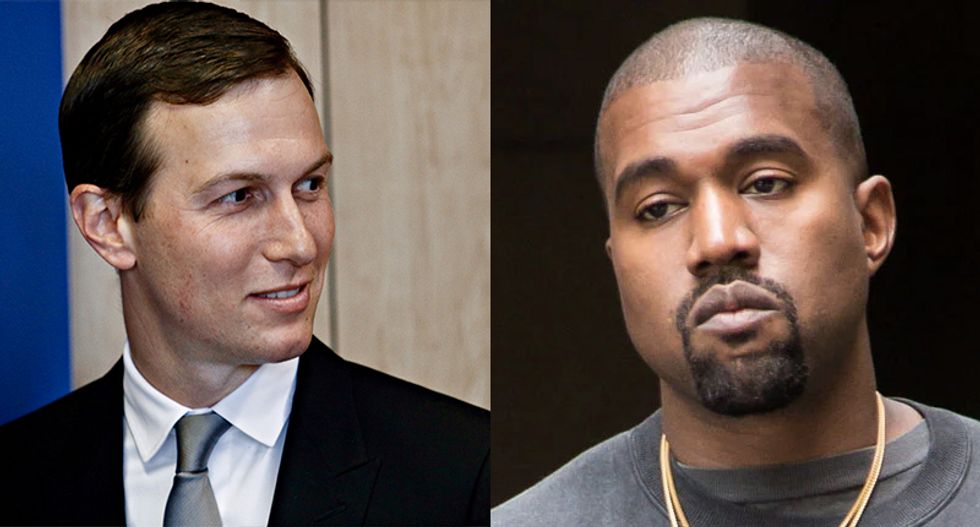 Election law expert Richard Hasen addressed comments from legal scholars about Kanye West and Jared Kushner coordinating during the 2020 campaign for the presidency.

Wednesday the New York Times reported that West had met with Kushner in Colorado last week. Meanwhile, Trump allies and at least one Trump lawyer helped gather signatures at the last minute in an attempt to get West on the ballot in key swing states and places where Republican senators are desperately trying to hold onto their seats. Not only that, West is speaking "almost daily" to Kushner, who is working as a kind of informal campaign chair.

It was a report that prompted Republican lawyer George Conway and others to question the legality, and Hasen walked through all the ways West is and is not breaking the law.

First, West's motivations for running aren't illegal nor is working to get on the ballot while you're openly supporting someone else. What is questionable, Hasen explained, is the possibility of an illegal campaign finance violation.

"A person can contribute up to $2,800 to a presidential campaign (and spend unlimited sums independent of that candidate to support that candidate’s run)," he wrote Thursday. "When someone spends money supporting a candidate but does so in coordination with a candidate for office, that counts as a contribution and is subject to the $2,800 limit. West surely is spending more than $2,800 on his campaign. If he’s doing so in coordination with the Trump campaign to help Trump win, that could count as an excessive contribution to the campaign and be illegal."

Hasen noted that he can't think of another case in which a candidate was discovered to have made a donation to another candidate in excess of the campaign finance limits simply by being a spoiler.

"The closest case I can think of on point is United States v. Goland, 959 F.2d 1449 (9th Cir. 1992)," he said, disclosing he was the clerk to the Judge David Thompson, who wrote the opinion. "Goland involved a 1986 U.S. Senate race in California between the incumbent Alan Cranston (a Democrat) and his Republican opponent, Ed Zschau. Michael Goland was a Cranston supporter because of Cranston’s pro-Israel views. Goland spent $120,000 producing commercials supporting a right-wing, anti-Israel third party candidate, Ed Vallen with Vallen’s cooperation (Goland hid his identity and worked through a company because he thought Vallen would have rejected his help). Goland said he spent the money supporting Vallen in the hopes of siphoning votes away from Zschau. Cranston went on to narrowly win the election of Zschau."

Goland could have only given $1,000 to any candidate for office, but as a candidate, he spent as much as he wanted to coordinate.

"He worked through his agent, Barnes, to fund and arrange the Vallen commercials," said Hasen. "The independent expenditures exception to contribution limits does not apply to Goland because: (1) agents of Vallen and Goland were acting in concert; and (2) Vallen cooperated with Goland by accepting the money and performing the commercial. Goland intended to contribute to Vallen’s campaign, and it is immaterial to conviction under section 441a(a)(1)(A) that he did so in support of Cranston."

The opinion still stands that spending money supporting someone for office in coordination with a candidate or his/her committee it's still considered a contribution subject to limits.

West is a little different in that he's spending his own money on his own campaign while coordinating with another campaign to help that campaign. It might be close enough that the conduct is illegal but Hasen said he isn't sure because there are no precedents he's aware of. It would take a lawsuit against West, to decide the degree to which West's coordination with Kushner is illegal. To make matters worse, proof of the coordination would involve a substantial discovery of phone records for Kushner, which could turn up a litany of other information.

Hasen explained there's another concern. The meeting at Trump Tower in 2016 between Donald Trump Jr., Paul Manafort, Jared Kushner and others to discuss "adoption" with a Russian operative was only considered criminal if the team acted wilfully in an attempt to violate campaign finance laws. West likely doesn't know anything about campaign finance laws but presidential campaigns typically have legal advisers.

"According to his spouse he is suffering from mental illness, which could well be relevant to his state of mind," Hasen also said. "Hard to know what his state of mind is from the outside. (Whether Kushner and the Trump campaign could also be found to have engaged in illegal activity seems easier given that this campaign has a large legal staff.)"

Hasen closed by saying that nothing is likely to happen to West in the next few months, and an FEC complaint would likely take years and be ignored by Attorney General Bill Barr. It's a big risk to take, however, because if Joe Biden wins, his attorney general could be a little more dedicated to the law than Barr.