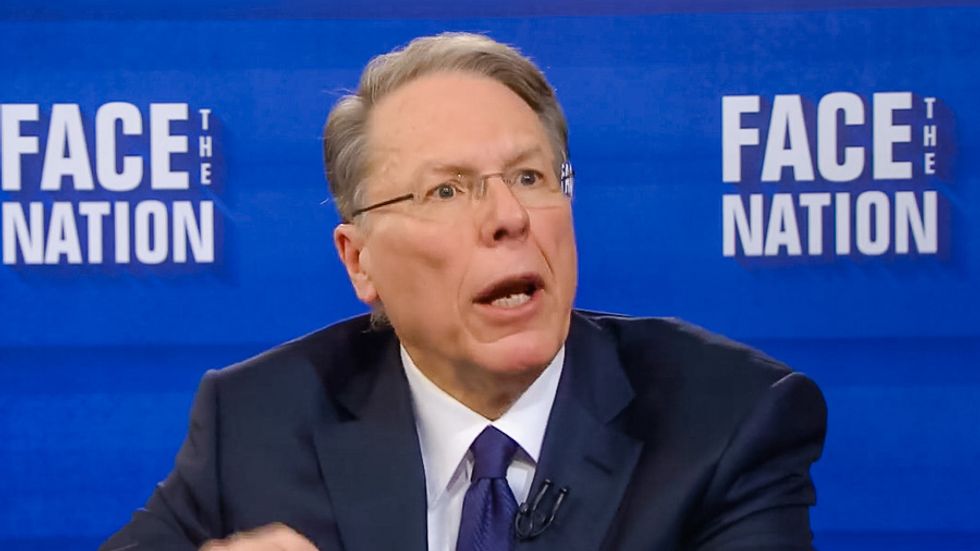 The lawsuit filed by New York Attorney General Letitia James against the National Rifle Association involves multiple damning allegations of fraud and self-dealing, many of which revolve around chief Wayne LaPierre's efforts to cover up his lavish personal expenses.

The sheer scope of fiscal mismanagement outlined in the lawsuit's 169 pages is massive -- here are five of the most jaw-dropping details.

1.) LaPierre took multiple trips in the Bahamas on a luxury yacht owned by a business partner -- but failed to disclose any of them.

The lawsuit details how LaPierre flouted the NRA's financial disclosure requirements by not revealing several trips he took on the 108-foot luxury yacht owned by the principle stakeholder of several businesses that have done business with the group.

When asked why he failed to disclose these trips as required by law, LaPierre initially claimed that he needed to keep them a secret for security purposes.

However, the AG’s office says that “LaPierre acknowledged that the NRA questionnaires only go to the NRA Secretary,” but also insisted he “was concerned about everybody on security, everything leaks.”

He further testified that he only considered the yacht a “safe place to do business” and not a “gift.”

2.) LaPierre got NRA donors to pay for over $100,000 worth of membership fees at a private golf course.

James's office claims that LaPierre racked up a six-figure bill at a Washington D.C.-based golf club over the span of nine years, all of which he got the NRA to pay for as a business expense.

"LaPierre testified that he uses the golf course for both personal and business reasons," the lawsuit states. "In its annual filings with the Attorney General for 2014 to 2018, the NRA asserted that it required substantiation prior to reimbursing these expenses. The Attorney General has not found any evidence that the golf membership fees and related business uses were substantiated prior to reimbursement."

3.) LaPierre awarded himself a post-employment contract worth an estimated $17 million -- without getting approval from the NRA's board.

LaPierre in 2013 signed a contract that would force the NRA to pay him millions of dollars in the event that he either retired or lost his election as NRA boss.

Crucially, the contract was approved without input by the NRA's board and was not signed by either the organization's first or second vice president, which the AG's office says was "required by NRA policy governing procurement."

Even LaPierre appeared embarrassed by this deal, and he testified to the AG's office that he never asked for it.

“I noticed that and kind of shook my head at it when I saw it,” he stated. “I didn’t ask for this contract. It’s what was presented to me and I signed it and it never went into effect because I stayed on as EVP.”

4.) LaPierre got the NRA to fund multiple private jet flights for his family members -- even when he wasn't on the plane.

The NRA chief claimed that he personally needed to take private jets on business trips out of security concerns -- but that didn't explain why he also signed off on multiple flights for his wife, niece, and other family members when he wasn't flying with them.

"From May 2015 to April 2019, the NRA incurred over one million dollars in expenses for private flights when LaPierre was not a passenger," James's office claims. "Upon information and belief, these expenditures were neither authorized by nor consented to by the NRA Board."

One particularly expensive trip was a flight in 2017, in which the NRA paid $26,995 to fly LaPierre's niece and her daughter from Dallas to Orlando.

LaPierre testified that his niece had tried to take a commercial flight initially, but a "mechanical problem" with the plane she wanted to use.

5.) LaPierre accepted all-expenses-paid African safaris without approval from the NRA's board.

LaPierre went on several hunting trips in Africa paid for by Under Wild Skies, Inc., a corporate entity that produces a hunting television show of the same name.

As the lawsuit details, the NRA has paid Under Wild Skies over $18 million after entering into an advertising and sponsorship agreement with the group in 2016.

During these safaris, LaPierre got Under Wild Skies to cover the cost of a wide array of expenses, including "professional hunter costs, camps, chartered in-continent travel, food and beverages, hunting licenses, trophy fees, and taxidermy."

However, James's office says these expenses "not authorized by resolution of the NRA Board or an authorized committee" and "constituted private benefits and gifts in excess of authorized amounts pursuant to NRA policy to LaPierre and his wife."