'It’s you who have created the hate and the division': Portland mayor unleashes on Donald Trump for MAGA creating violence 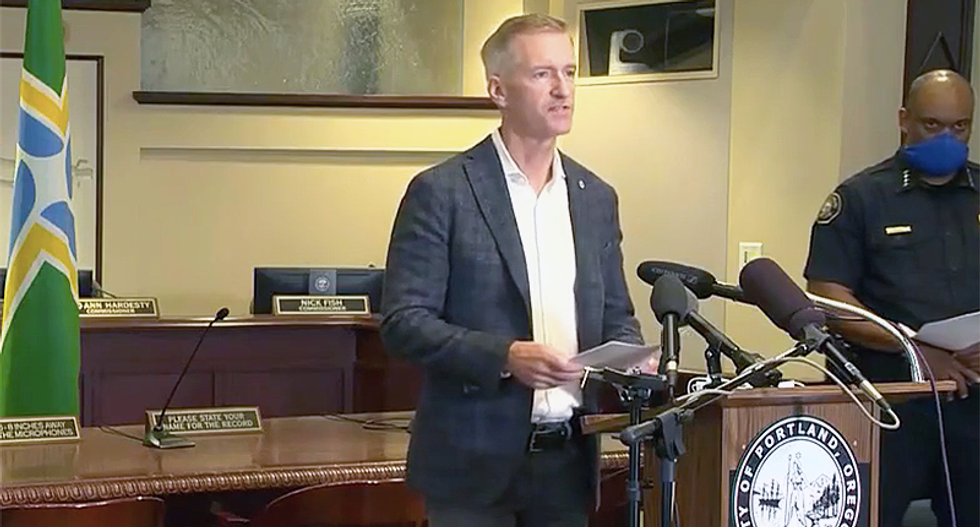 The area had already been cleared by police, the police chief reported during a press conference Sunday detailing the specifics about the event.

But it was Mayor Ted Wheeler who went after President Donald Trump.

He began by calling it a homicide and denouncing the violence in the city. He went on to ask that people seeking retribution stay out of Portland.

"One death is one death too many. Join me by denouncing all violence," he said. "Yesterday's event began with hundreds of cars filled with supporters of the president rallying and driving through downtown Portland. They were supported and energized by the president himself. President Trump, for four years, we have had to live with you and your racist attacks on Black people. We learned early about your sexist attitudes towards women. We've had to endure clips of you mocking a disabled man. We've had to listen to your anti-democratic attacks on journalists. We have read your tweets slamming private citizens to the point of receiving death threats, and we have listened to the attacks on immigrants. We have listened to you label Mexicans rapists. We've heard you say that John McCain wasn't a hero because he was a prisoner of war, and now you're attacking Democratic mayors and the very institutions of democracy that have served this nation well since its founding."

He went on to ask Trump if he ever wonders why this is the first time in decades that Americans have seen this level of violence.

"It's you who have created the hate and the division," he said. "It's you who have not found a way to say the names of Black people killed by police officers even as people in law enforcement have. It's you who claimed that white supremacists are good people. Your campaign of fear is anti-democratic. You have tried to divide us more than any other figure in modern history. Now you want me to stop the violence that you helped to create. What America needs is for you to be stopped so we can come back together as one America while recognizing that we must demand that all people, Black, brown, white, every color from every political persuasion pull together and hold all people accountable in stopping racism and violence. We together are peaceful again under new leadership that reflects who we really are. We the people of this great nation."

"President Trump, you bring no peace. You bring no respect to our democracy," he continued. "You, Mr. President, need to do your job as the leader of this nation. I, Mr. President, will do my job as the mayor of this city. We will both be held accountable as we should. I'm calling out every other elected official in Oregon to join me. Not only in defeating racism but helping me to stop the violence as we are and will continue to be held accountable by all of our residents."