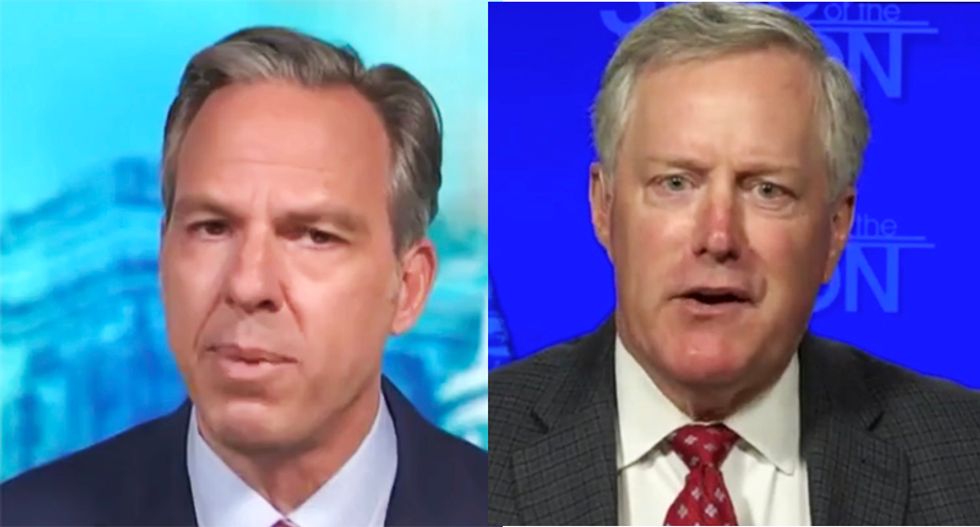 Toward the end of a long and combative interview with Mark Meadows, CNN "State of the Union" host Jake Tapper called out Donald Trump's White House chief of staff for lying to him earlier in the segment when he claimed no Post Office high-volume sorting machines were being hauled away to slow down mail delivery.

In the first few minutes of the CNN interview, when confronted with reports about the machinery being decommissioned, Meadows insisted it was lie and part of a narrative cooked up by Democrats. He then challenged Tapper's producer to find out the facts and "whisper" them into the CNN host's ear.

Approximately ten minutes later, they did just that.

"In terms of the fact check that you asked me to look into, one of my great producer did, it's in terms of the machines," Tapper began. "Chris Bentley, president of the National Postal Mail Handler's Union Local 297, which covers Kansas and part of Missouri, two good Trump states, told CNN that postal management has already taken out four machines in Kansas City, two machines in Springfield, Missouri, and one machine in Wichita, Kansas. That is earlier this year under this new postmaster general."

"With all due respect and if we look at it, I can talk to Kansas, I can talk to Tucson, Arizona, you're talking to someone who knows, it's when we take out those processing, they're part of a processing center that comes in," Meadows attempted. "And as we start to move those out, if they were not part of an already scheduled reallocation, it's not happening. It's not a new initiative by this postmaster general. And when we look at this, it's all about efficiency."