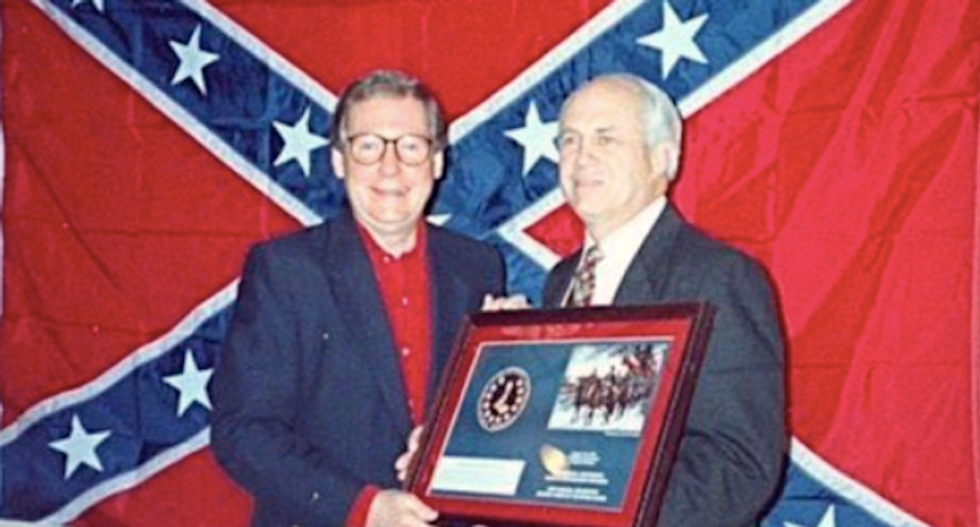 Senate Majority Leader Mitch McConnell explained the origins of an infamous photograph of himself standing in front of a Confederate flag.

The photo has circulated for years, and it's believed to have originated in the early 1990s at an event held at Big Spring Country Club by the Louisville-based John Hunt Morgan Camp 1342 of the Sons of Confederate Veterans, reported the Courier-Journal.

"My recollection of that is skimpy," McConnell told the newspaper. "But the reason I was invited to come speak to them is because I am indeed the ancestor of a Confederate soldier, and I had looked up some information on him. And my recollection was that that’s what I talked about."

Adjutant Bill Hayes of John Hunt Morgan Camp 1342 said the group had few members left who would have attended that event, but he said an older member told him that the photo was taken at one of their events where McConnell had been invited to speak.

"I was there to talk about my ancestor, which I did," McConnell said, "and everything else I was doing ... I think underscored that I was a vigorous opponent of racial discrimination."

As Jefferson County judge-executive in the late 1970s and early 1980s, McConnell said he agreed to a consent decree in a federal court case over racial discrimination in the police department, which led to the county government instituting affirmative action policies for hiring Black people.

"I showed it in county government," McConnell said. "I almost [lost] a re-election over it because the [Fraternal Order of Police] hated what I did, and I overrode President [Ronald] Reagan’s veto of the anti-apartheid act."

"I don't regret going to speak to a group which at the time was not being considered, you know, a pariah in our society," McConnell said. "I, over the years, have probably been to plenty of groups and shaken hands with a whole lot of people who didn’t agree with me."