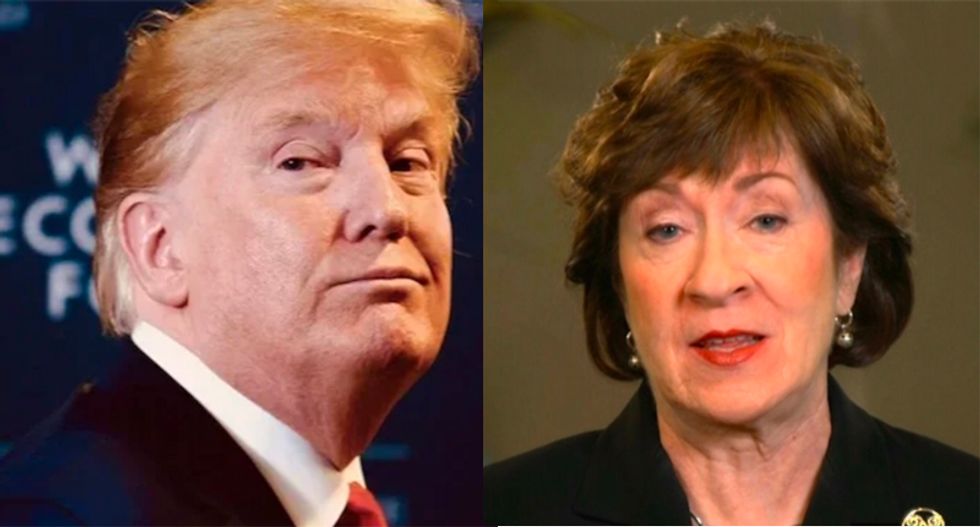 Sen. Susan Collins (R-ME) -- along with several other GOP lawmakers -- was raked over the coals by MSNBC's "Morning Joe" co-host Joe Scarborough on Monday morning for their part in leaving Donald Trump in office, which his critics claim has now led to him trying to steal the November election by trying to cripple the Post Office.

Using the president's own words last Friday that he was withholding funds from the USPS in order to disrupt mail-in voting, the MSNBC host reminded the Maine Republican of her comments after the president's Senate impeachment trial. Collins had remarked that Trump had "learned his lesson."

"Let me give you a quote that every American needs to hear and Postmaster General [Louis] DeJoy needs to hear because he's part of a conspiracy to disenfranchise millions of voters," Scarborough began. "I don't know how that feels for him and the board members whose pictures we will be putting up the next several weeks, I don't know how that feels for him two or three months before an election. I can tell you, it's going to sting in the years that follow the elections. I know he's [DeJoy] got this 15,000 square foot house that he calls the castle, can't hide in it. you can't hide from history. When the guy you're working for, who wants you to disenfranchise millions of voters and Donald Trump doesn't give a damn what people think of him, but you probably do, your wife probably does, she served honorably under George W. Bush."