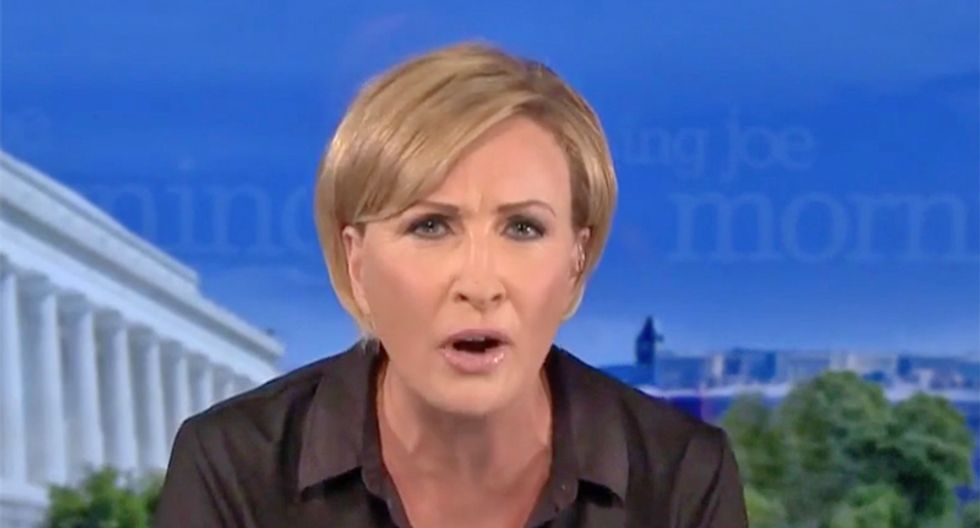 MSNBC "Morning Joe" co-host Mika Brzezinski abruptly cut off a clip of Donald Trump discussing testing and wearing masks during the coronavirus pandemic, calling his words nothing more than lies, before she went off on a frank rant calling the president "stupid and pathetic" before adding he is responsible for countless U.S. deaths.

Not long after the clip began running, the host cut in, saying in disgust, "Just get out of this. I mean, this is the president who just lied four times in a row and I just cut it short because we don't need to hear him lying."

Then she went off.

Blaming the president for slowing down COVID-19 testing and saying it was "utter stupidity," she added, "Talk about ditzy, talk about a ditzy, stupid, botched response to a pandemic that is killing tens of thousands of people, over 160,000 right now -- this is on you. Many of those deaths, Mr. President, are on you and your terrible response to this virus. You can't even show leadership on masks, and now, you're politicizing your lies against Joe Biden, who's saying everyone should wear masks because it could reduce the numbers of transmissions of the coronavirus, which is what Dr. Fauci is saying, which is what all the doctors are saying and former CDC directors are saying."

"People who have degrees and decades of knowledge in studying pandemics and infectious diseases and yet you go out there and just blow off stupid ideas about injecting Clorox into your body and taking hydroxychloroquine when it isn't safe enough, saying you took it? " she continued. "It's idiotic. And it's killing people -- and you get up there and talk about Joe Biden being wrong?"