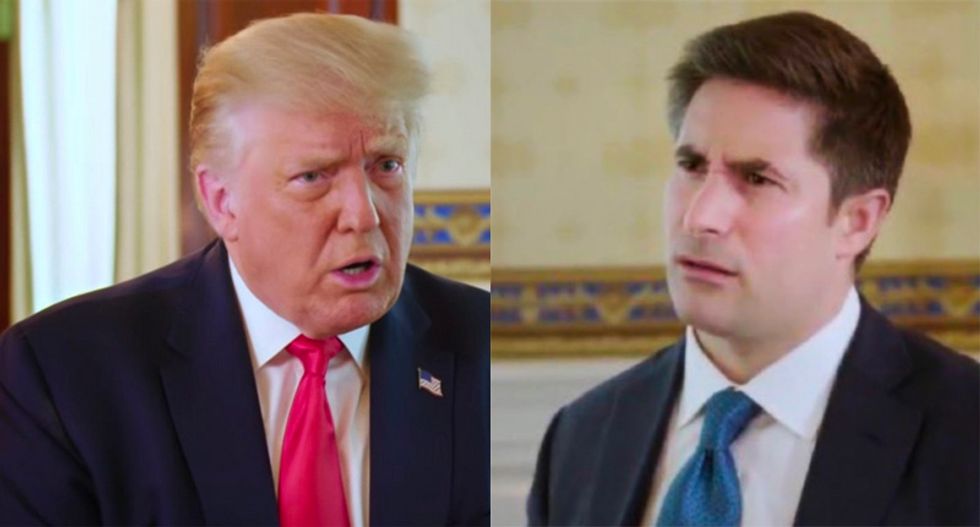 Deep in a Daily Beast report detailing the problems Donald Trump is having getting his floundering re-election campaign untracked, Sam Stein reveals that the president -- who increasingly appears detached from reality -- told aides that he thinks his much-derided Axios interview with Jonathan Swan was a big success.

The president, who often gauges the success of his TV appearances on ratings as opposed to how he is perceived in them, reportedly said it made for "great TV."

According to Trump biographer Tim O'Brien, the president received a free pass from the press before he became president and that he is in a whole other world now that his every move is scrutinized.

“His time in the spotlight in the ‘80s and ‘90s, and again in the ‘00s, spoiled him because he got away with that charade to a certain extent,” explained O’Brien. “The media wasn’t fact-checking him and reality-checking him on a daily basis the way it is now during his presidency. Yet because his bullshit-artistry was baked in decades ago he just keeps approaching everything in his life this way—not just pressers and interviews. Everything.”

With that in mind, Stein wrote, 'To that point, where viewers, political observers, and many of Trump’s own senior officials watch some of his interviews and see bloodletting, Trump often sees victory," before adding, "In the immediate aftermath of the Axios interview, the president told several people close to him how well he thought it turned out and what great television it had made, according to two people familiar with his private remarks on the matter."

According to one White House insider, the president felt he did better than presumptive Democratic presidential nominee Joe Biden would have fared, telling the Beast, "He said it went very well and that Biden could never stand up to that kind of questioning. He absolutely was not mad about it.”

As Stein notes, before pointing out that Trump may have prevailed in 2016 because he was running against a woman, former Secretary of State Hillary Clinton, "But if Trump believes, as O’Brien put it, that he 'can control any problem through sheer force of will,' it may say as much about the political ecosystem in which he operates as it does about him. Trump may be unique in how brazen he is about it, but self-confidence and self-promotion are traits in abundance for most politicians. It’s just that he operates in a political system in which male politicians are not questioned for exhibiting those characteristics while female politicians are."

You can read more here (subscription required) and watch the interview below to judge for yourself: