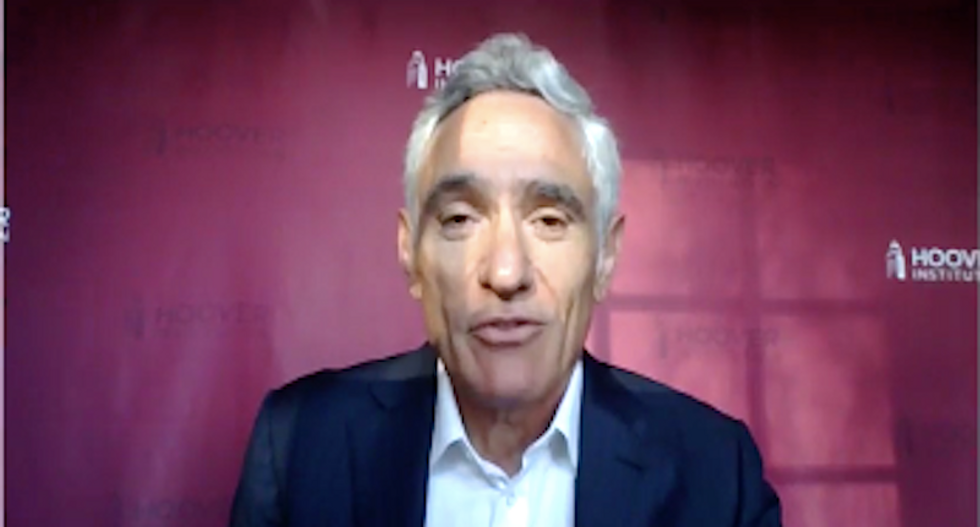 The president introduced Dr. Scott Atlas on Monday during his reinstated daily briefings, although he still hasn't spoken at either of the two media events he's attended to update the public on the deadly pandemic, reported CNN.

"He's working with us and will be working with us on the coronavirus," Trump told reporters at Monday's briefing, "and he has many great ideas, and he thinks what we've done is really good, and now we'll take it to a new level."

Atlas, a fellow at Stanford University's Hoover Institution and former chief of neuroradiology at the university's medical center, frequently appears on Fox News, where he dismisses concerns about schools reopening as "hysteria" and pushed for resuming college sports -- just as Trump has.

Multiple sources told CNN that Atlas has been informally advising Trump for weeks, after first catching the president's attention on Fox News.

Atlas told the conservative network that it didn't matter how many cases there were in the U.S. and falsely claimed children under age 18 "essentially no risk of dying" and "almost never" transmit the deadly virus.

The physician also claimed teachers at high risk should "know how to protect themselves," and baselessly blamed outbreaks in southern states on Black Lives Matter protests and immigrants.

"I'm an adviser," Atlas told Fox News after appearing at the first briefing. "I was asked by the President to advise him and it's obvious that the answer is, 'Yes, sir, and any way I can help I will do so.'"

Atlas joins the president's coronavirus task force as Trump has sidelined Dr. Anthony Fauci and even Dr. Deborah Birx, and two officials told CNN they worried the new COVID-19 adviser was brought on board to diminish their roles in fighting the pandemic.

He's already working out of the Executive Office Building next door to the White House and will join the president Wednesday for a briefing on reopening schools.