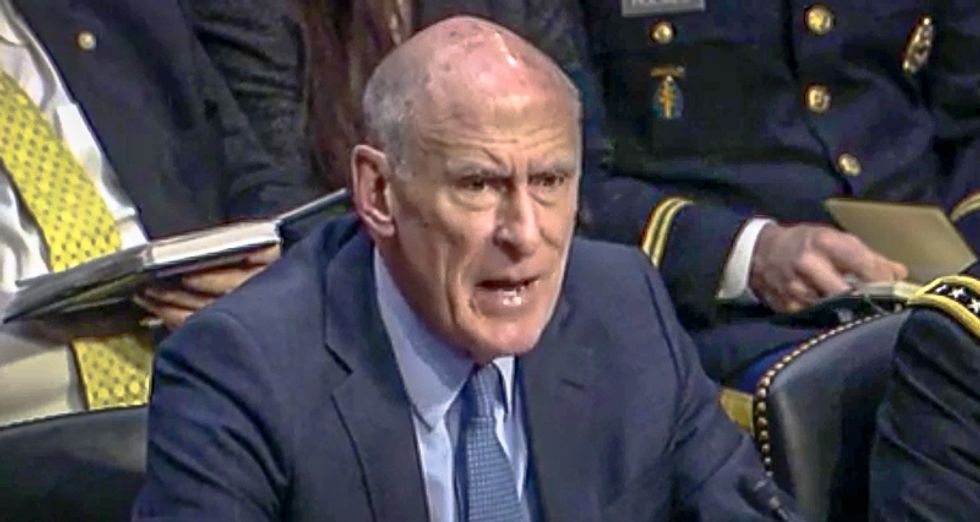 The president and attorney general have been questioning the integrity of mail-in voting, while the Department of Homeland Security has downplayed threats from foreign election interference -- and former director of national intelligence Dan Coats expressed his alarm in a new op-ed for the New York Times.

"Our democracy’s enemies, foreign and domestic, want us to concede in advance that our voting systems are faulty or fraudulent; that sinister conspiracies have distorted the political will of the people; that our public discourse has been perverted by the news media and social networks riddled with prejudice, lies and ill will; that judicial institutions, law enforcement and even national security have been twisted, misused and misdirected to create anxiety and conflict, not justice and social peace," Coats wrote.

"If those are the results of this tumultuous election year, we are lost, no matter which candidate wins," he added.

"No American, and certainly no American leader, should want such an outcome. Total destruction and sowing salt in the earth of American democracy is a catastrophe well beyond simple defeat and a poison for generations. An electoral victory on these terms would be no victory at all. The judgment of history, reflecting on the death of enlightened democracy, would be harsh."

Coats urged Congress to establish a "supremely high-level bipartisan and nonpartisan commission to oversee the election," pledged by oath to set aside partisan concerns to protect the election's integrity.

"Both presidential candidates should be called upon to make such personal commitments of their own," Coats wrote.

"If we fail to take every conceivable effort to ensure the integrity of our election, the winners will not be Donald Trump or Joe Biden, Republicans or Democrats. The only winners will be Vladimir Putin, Xi Jinping and Ali Khamenei. No one who supports a healthy democracy could want that.

MSNBC's Nicolle Wallace could not figure out why Sen. Josh Hawley (R-MO) would oppose to a domestic terror law, but panelists explained that it's likely personal.

"The issue here is blame, and he is feeling the heat, obviously," said New York Times reporter Peter Baker. "He's been excoriated not just by Democrats, but even fellow Republicans like John Danforth, former senator from Missouri, Republican, and one of his mentors, who said endorsing him was one of his biggest mistakes. He's been excoriated by his home state newspapers. He's trying to distance himself from the actions of Jan. 6th in making the case to some of the more extreme people out there on the right that the government is really to blame, the government's excessive power is the real problem here, and that appeals to some in the crowd that day."

On Wednesday, Dave Boucher of the Detroit Free Press reported that Republicans in the Michigan state Senate are advancing an amendment that would bar the state from using a "social vulnerability index" to prioritize distribution of COVID-19 vaccine doses — meaning that it would be illegal to prioritize areas based on race, socioeconomic status, or a number of other factors.

State Sen. Jim Runestad justified the bill by complaining that under the state rules, a 20-year-old with "minority status and you don't speak English that well" would get a vaccine ahead of a 65-year-old. This is false, as 20-year-olds are not yet eligible for vaccines in Michigan.