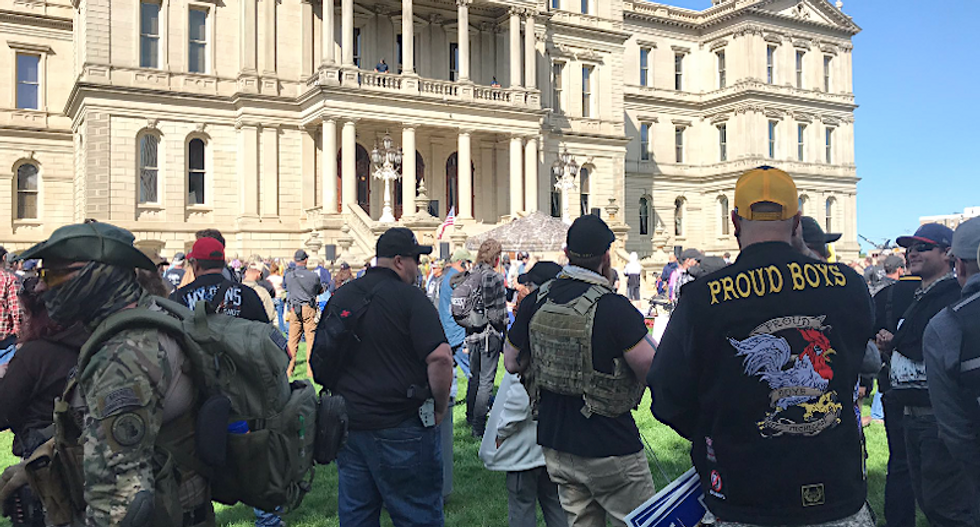 About 1,000 demonstrators carried rifles and handguns outside the Lansing statehouse Thursday to protest a recent push to ban guns from the Capitol building and the Democratic governor's stay-at-home orders to prevent coronavirus spread, reported MLive.

Members of the far-right Proud Boys and the paramilitary Michigan Liberty Militia took part in the demonstration.

The protest, which was planned weeks ago came shortly after the Michigan State Capitol Commission rejected two proposals to ban weapons in the statehouse, in response to a previous armed protest against Gretchen's coronavirus orders.

“It’s been four months since armed gunmen stood above elected officials while they worked,” tweeted Michigan Senate Democrats this week. “Legislators, staff, children & teachers shouldn’t have to fear guns in the Capitol.”

David “Dude” Dudenhoefer, a Republican challenger to Rep. Rashida Tlaib (D-MI), agreed the April 30 demonstration may have looked bad to some, but he pointed out that none of them had fired shots and compared that to violence at protests against police brutality.

“Wherever you go, you have the right to defend yourself,” Dudenhoefer said. “If there are places where they restrict that right, that’s a criminal empowerment zone.”