Seth Meyers knocks 'petulant psycho' Trump for disaster debate: 'Like a drunk who wouldn't hand over his keys' 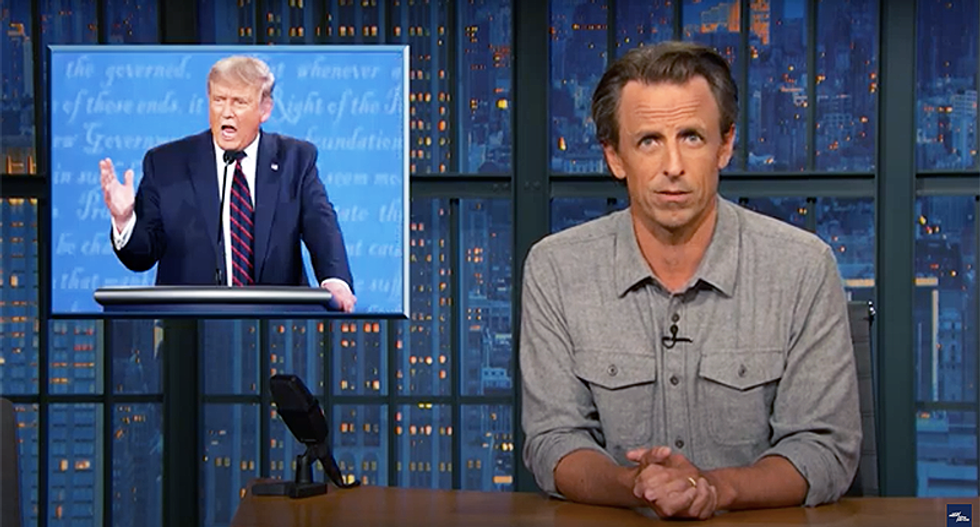 In his Wednesday "Closer Look" segment, Meyers noted that "debate" wasn't the right word, "it was more like a collective brain hemorrhage. It was like watching democracy get a lobotomy."

He played clips of the horrified CNN hosts, calling it everything from a "disgrace" to a "sh*tshow," and said that they were far too charitable.

"Watching that debate was like hotboxing a porta-potty with crystal meth in Phoenix in July," Meyers characterized. "It was like being hit on the head with a lead pipe in a room filled with nitrous oxide. It was like watching a two-person performance of '12 Angry Men' where one actor played one part, and the other was mad enough for the other 11."

Meyers turned to the conspiracy theories flooding the airwaves ahead of the debate. In fact, Fox News spent the entire day leading up to the debate portraying former Vice President Joe Biden as if he couldn't even speak, much less stand at a podium without knocking it over like Chevy Chase in SNL. At one point, in particular, Rudy Giuliani claimed he "interviewed" several "doctors" about dementia, and they diagnosed Biden with having it. But Meyers wasn't so sure they were interviews as much as they were Giuliani's own personal exams.

"Were you wearing a gown that tied in the back?" Meyers asked.

"These interviews were so secret they didn't want me taking notes, so they tied my hands together," Meyers mocked, showing Giuliani in a straight jacket.

He went on to knock the Fox & Friends hosts for staying so stoned face they were like "tourists watching a homeless man take a dump on the F train." He also quibbled with Brit Hume's attack on Biden that he's "hiding" that he's "senile."

"Seems to me that if you have it together enough to hide that you're senile, you might not be senile," said Meyers. "Pretty sure if you're suffering from dementia it would show up at the debate. In fact, I'm pretty sure it did. Seriously, everyone watching that debate had flashbacks to arguing with a drunk friend to hand over his car keys."

Since it became obvious that Biden wasn't in any kind of cognitive decline, Fox had to quickly switch tactics, suggesting that he was on drugs instead. Meyers explained that if anyone is on drugs, it's got to be Fox News, because every time one turns over to the channel, they act like they've just finished doing blow in a bathroom at CBGB. They act like coked-up screenwriters pitching ideas. 'So what if he like, has, I don't know, he's like, a secret earpiece? He gets questions in advance, but he's senile, and you can't tell because he got a shot of adrenalin in his heart just like, uh, Pulp Fiction. WOO!"

Meyers explained that if Biden had an earpiece, he'd have the old ones with the curly wire that looked like a Secret Service agent, and he'd get too excited and "pretend like he was an undercover cop at a drug bust."

In the end, Trump's only option was to rant and rave like a rabid lunatic because he has no real ideas about issues, no record to stand on, no progress on his promises, and an inability to stand up to white supremacists. His only chance of remaining in power, Meyers said, is by undermining the election and creating violence if he loses.

See the full take from Meyers below: