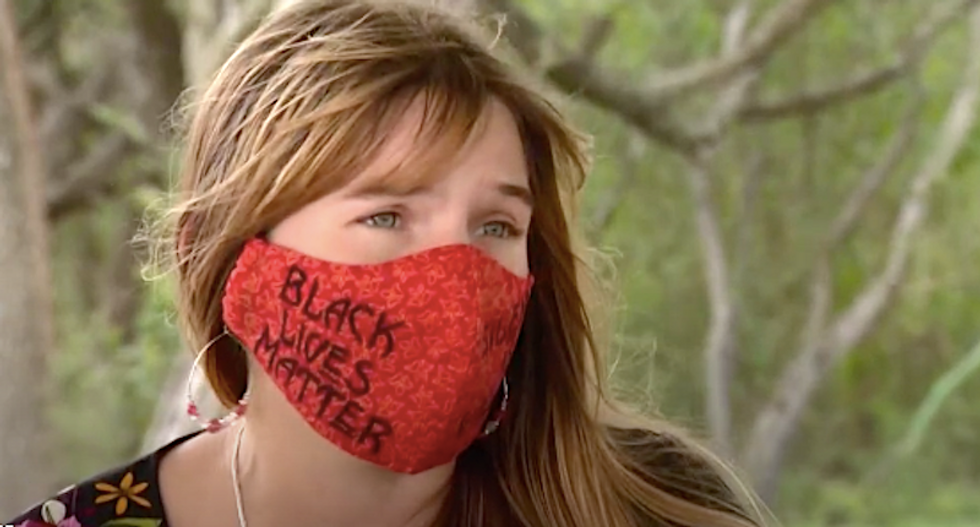 Lillian White was terminated from Great Hearts Western Hills about a week before students returned to class because she attended in-person training sessions with homemade face coverings printed with the phrases, “Black Lives Matter” and “Silence is Violence," reported KENS-TV.

“For about a week and a half I was wearing these masks and no one said anything," White told the station. "A couple of the other teachers came up and asked for some if I had any extras and I made them some."

But then she got a text message from the San Antonio school's assistant principal asking her stop wearing the masks.

“We’d like you to stop wearing these masks anymore," the assistant principal said, according to White. "Parents will be coming around more and we don’t discuss the current political climate."

However, White continued wearing her masks despite additional warnings because she's committed to the cause.

“This is human rights and it should be something that is promoted at our school," she said. "It’s an excuse to not talk about it by saying this is politics, talk about it on your own time. It’s just an excuse because they’re uncomfortable with the conversation."

The school fired White as an art teacher before the start of her second year there, but she's still hoping to change the culture there to promote social justice.

“I’m still trying to get them to enact some kind of anti-racism action plan so even though I don’t teach there anymore," White said. "I think that all this backlash, especially the negativity from parents and the fact that I was fired because of this, means that this is a conversation they still need to have."

The school declined to comment on White's termination, but issued a statement explaining that face masks worn at Great Hearts may not have any messages printed on them.

"Great Hearts was founded and exists today to serve the innate dignity and worth of every human being," said superintendent Daniel Scoggin. "We stand with the Black community and all who are suffering. Great Hearts deplores bigotry and its crushing effects on all those subjected to it. Great Hearts is committed to an America where racism, violence, and injustice do not happen, because such acts find no home in the hearts of a great people."