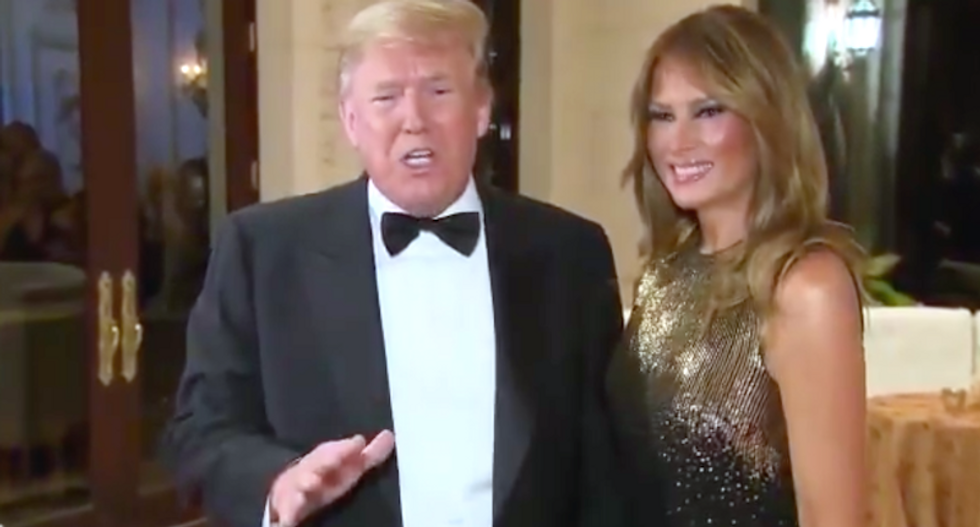 Maybe it has ever been thus, but Donald Trump is using our tax dollars to send to potential voters in an outwardly political effort.

Recent efforts, for example, include ponying up an extra $13 billion more dollars in pandemic aid for big agriculture under the name of expanded aid to farmers in rural America whose support Trump needs, and a late-inning aid package to Puerto Rico – three years after the hurricanes that devastated the island – in what amounts to begging disrupted Puerto Ricans in Florida to see things his way.

The Puerto Rican aid actually is the polar opposite of what Trump had said he would do. But hey, this is a political election, and you throw a few billion bucks where you think it might help the most.

Maybe this works, maybe. But to this voter, at least, the act of tossing my tax money around for Trump’s political gains—or any other president -- strikes me as abuse.

More broadly, though, these stories are reminders of our obsession with money, the need to have more and more. Devotion to money drives economic policy lashed to continuous growth at the expense of forests and clean water, for international aggression, for more weapons, bigger armies, and a dictatorial view of trade.

One thing you can say about Black Lives Matter efforts or climate control protests, say, by contrast, is that they have nothing to do with making more money.

Democrats are not free of such concerns, though their money concerns are for campaigning and, at the moment, do not cross over to policy. News that Joe Biden’s campaign had raised $350 million in one month to spend on advertising raises the question about why so much money needs to go to an effort that is supposed to be about ideas.  The New York Times outlined how Trump has blown through a remarkable $800 million only to leave him several percentage points behind nationally. Mike Bloomberg throws in $100 million bucks into the Florida contest, and then is criticized by Republicans for also offering to pay fines owed by ex-felons as if that is the only financial pandering going on.

Behind the hullaballoo over Donald Trump’s disparaging remarks about “losers” and “suckers” in the military is an assumption that the only reason for doing anything is to get money or fame or glory in some manner in return.

Money is the driver behind Michael Cohen’s tell-all book about Trump as well, an extended set of disclosures of the obvious, that Trump is obsessed with garnering more at the expense of anyone in his way, whether people or institutions. Pursuit of greed and power, which Cohen interchanges, are at the heart of his claims about Trump’s willingness to do anything to advance his ties with Russian President Vladimir Putin, for example.

So, too, are Trump White House policies about taxes, environment and health care, which are all about money rather than the public welfare, about America First and pro-business attitudes. The win, win, win is about gaining more, not better.

Recent disclosures about those in the Trump circle only expand this idea: Steve Bannon ripping off Wall-building efforts through a non-profit, and Postmaster General Louis DeJoy basically running an election campaign finance scam through his company during the 2016 election to raise millions for Donald Trump are efforts totally about getting more money, illegally in these cases. Money meant for pandemic has been routed to defense contractors.

Throughout the Trump years, we’ve seen a succession of Trump associates and Cabinet members who faced discipline for seeking to fatten their own wallets or draw private benefit from public dollars, from Scott Pruitt to Wilber Ross to now

Secretary of State Mike Pompeo. Then there is Trump himself, routing millions of dollars in Secret Service and protection services to his own hotels, and his family earning bushels of dough from businesses from which they had promised to separate.

The Trump years have proved an ethical Whack-a-Mole game in which the taxpayer is always the loser.

Out for the Money

It seems that every other day, we’re hearing about another politician whose family or former business has decided to cash in on the political coattails. The tempest over Biden’s son, Hunter, getting a no-show job for years on the basis of the family name is all about money too. He may have done nothing illegal – but it obviously was wrong to get this job out of the perception that his name might prove influential.

Examine Trump’s calling out of “shithole” countries, and what you find is a disparagement of communities that are not sufficiently making money, because only if you have money can you have power and influence.

If the character issue is what finally determines an outcome in this election rather than say, the spottiness of handling a national response to pandemic, it will largely pit Trump as a power-and-money guy against Biden as a would-be liberal source of empathy and big government.

Both are stereotypes, but giving rise to the caricatures is some basic truth.

The elections, like the pandemic, the need to rethink futures, our issues of justice, should focus our concerns on questions much broader than pursuit of money. I can put up with a good donnybrook over direction for the country, even about competing visions of the main issues ahead.

It seems really tacky that our public affairs are dictated by simple greed.