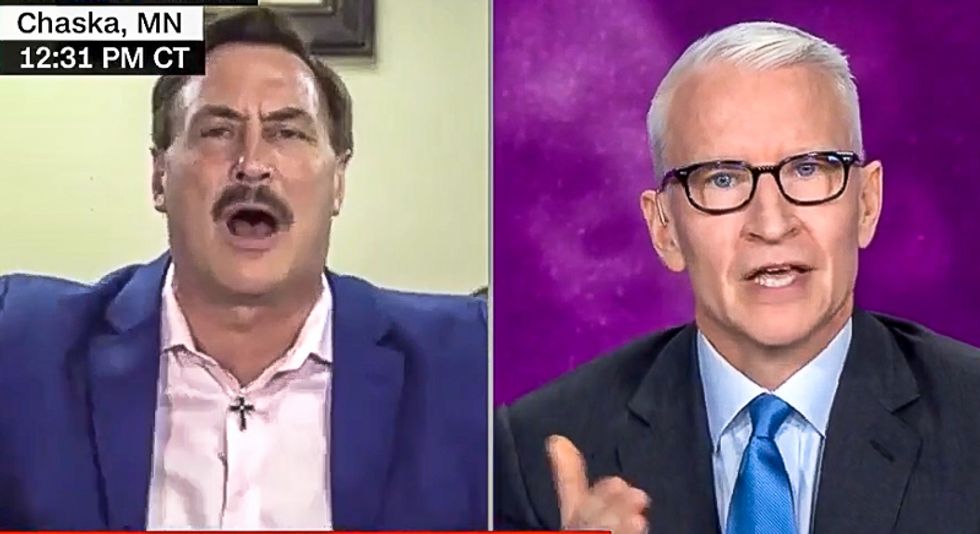 Mike Lindell, the Trump-loving CEO of MyPillow, is threatening to sue Anderson Cooper after the CNN host last month called him out for peddling bogus COVID-19 therapeutics.

Newsweek reports that attorney L. Lin Wood sent a letter to CNN threatening "legal redress" unless Cooper retracted his claim that Lindell was a "snake oil salesman" for pushing Oleandrin, an unproven treatment for COVID-19 that experts warn could be toxic.

"While I am fully aware that Cooper's sarcastic, mocking, derisive, and demeaning tone, attitude and facial expressions toward Mr. Lindell are not legally actionable, I have complete confidence that Cooper's false and defamatory accusations are actionable," he wrote in his letter.

During the interview with Lindell, Cooper repeatedly assailed the MyPillow CEO's credentials.

"You don’t have a medical background, you’re not a scientist, yet you’re claiming this substance, which has not been studied in any meaningful way, can cure COVID," he said. "And you have a financial stake in the company. You would profit from it if this is being sold widely. Morally, is that right?"

In his letter, Wood claims that Cooper was incorrect about testing for the drug, and said that he used that false assertion to "cast aspersions on Mr. Lindell's character and reputation."