‘Wake up!’ John Kasich explains to Meghan McCain why GOP voters should back Biden 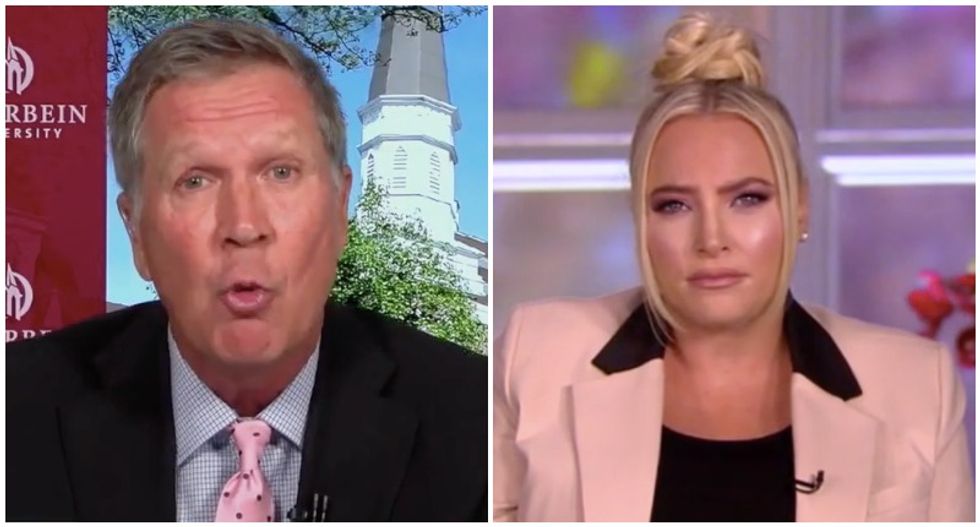 "The View" co-host Meghan McCain hasn't publicly committed to voting for Joe Biden over President Donald Trump, and she asked fellow Republican John Kasich how he reconciled his decision.

The former Ohio governor has endorsed Biden and even spoke at the Democratic National Convention, but McCain still hasn't decided whether she'll vote for the Democratic family friend instead of backing some other candidate against the president -- who she vowed not to back.

"Governor, I actually have been looking forward to having you on to ask this question because you know my family," she said. "I was raised with a certain set of values and principles and I was raised conservative. I've only gotten more conservative as I've gotten older, and I'm almost nine months pregnant."

"I hate President Trump, and I think everybody else knows that," McCain added, "but there are some policies on the left, specifically with Kamala Harris right now, having to do with abortion. She co-sponsored a bill doing away with any limits at all, also running on taxpayer funding for abortions. I was surprised at this. You're pro-life, and I know that. You were pro-life in politics, as am I. It's a big part of who I am and my platform, and I don't think taxpayers should be funding abortions for women who are as pregnant as I am right now. How would you push back against a voter like me who's concerned about things like this in a possible Biden-Harris administration?"

Kasich agreed with her position on abortion, and admitted he disagreed with Biden on many other issues -- but he said the alternative is demonstrably worse.

"The issues here are dwarfed, in my opinion, by the fact that he's a person that can pull us together," Kasich said. "So do I think that if we wins, that all of a sudden all these things are going to happen that are negative? No, I don't believe that at all because that's not his character."

"I hope this is appropriate for me to say," he continued. "As you know, your father and Joe were great friends. Why? Not because they agreed on everything, but they could find common ground. So do I think we're going to end up in some cataclysmic place if he wins? I don't, but I do believe four more years of this division is wrecking the very soul of our country, and we continue down this path, I don't know how we come back."

"I would encourage people to look at what I wrote on USA Today about the power of faith," Kasich added. "Franklin Roosevelt, [Abraham] Lincoln himself called on the power of God to help the American people to overcome crises. That is part of how we're going to overcome this division, with the inspiration from our creator animating individuals to wake up to what's happening in this country."