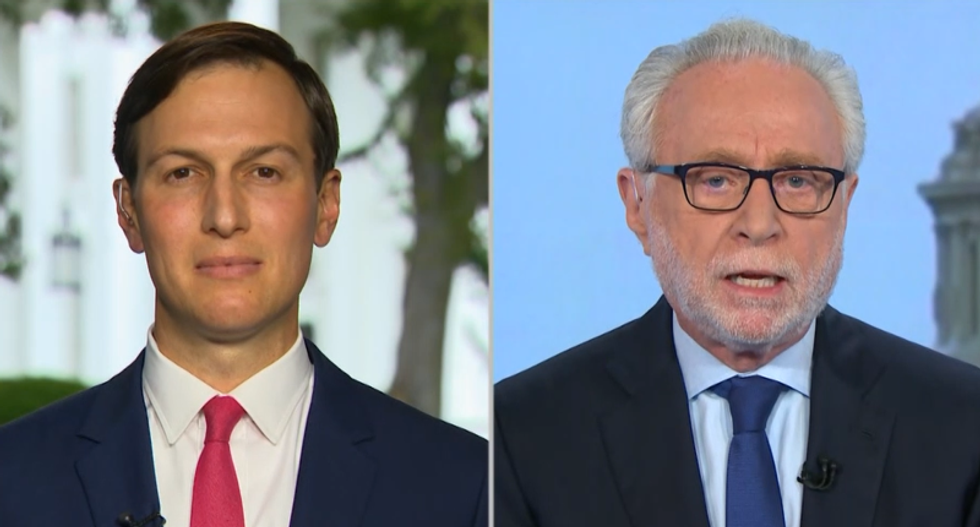 On CNN Tuesday, at the end of an interview with President Donald Trump's son-in-law Jared Kushner about the Middle East peace agreement, anchor Wolf Blitzer confronted him about the president retweeting an image implying Joe Biden is a pedophile.

"I was very disturbed earlier today when I saw the president re-tweet to his 80 million-plus followers a very, very disturbing ugly message, accusing the Democratic presidential nominee Joe Biden of actually being a pedophile," said Blitzer. "Is that appropriate to give publicity to a really disgusting accusation like that, especially at a time when there are all those QAnon conspiracy theories about pedophiles running the Democratic Party, all those anti-Semitic conspiracy theories they're spreading as well. It's so disturbing to see that, Jared."

"Look, Wolf, I haven't seen the tweet," said Kushner. "I've been focused today on this historic peace deal ... I'm happy to come on another time and talk about that, but today let's focus on the fact that President Trump was nominated this month two times for the Nobel Peace Prize."

"I congratulate you and the president and the administration on this historic deal," said Blitzer. "But please tell your father-in-law that it's really bad, it's really disgusting to re-tweet those kinds of ugly, disgusting tweets about his Democratic rival. As you can tell, Jared, I was pretty upset when I saw that."

"I will relay to him your concern," said Kushner. "One thing about this president, he's a very transparent president. He lets people know what he's thinking. He tweets, he says what he feels is out there. And, again, he always is expressing himself in the way that he sees fit."