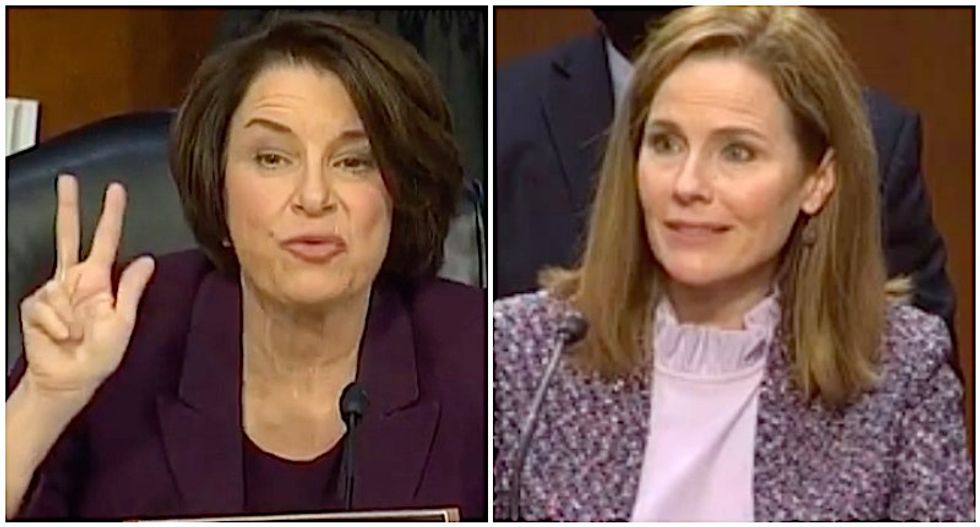 Amy Coney Barrett got defensive about her work on the George W. Bush-Al Gore recount when pressed about it by Sen. Amy Klobuchar (D-MN).

Klobuchar pointed out that Barrett would be the third justice who had worked on the Republican legal case in the Bush v. Gore decision that halted the Florida recount, joining Chief Justice John Roberts and Justice Brett Kavanaugh, and the nominee squirmed.

"I did work on behalf of the Republican side," Barrett said. "To be totally honest, I can't remember exactly what piece of the case it was."

Klobuchar told her not to worry, that she would remind her.

"We're in the middle of a global pandemic that is forcing voters to choose between their health and their vote," Klobuchar said. "Are absentee ballots, better known as mail-in ballots, an essential way to vote for millions of Americans right now?"

Barrett said that was a matter of policy she would not comment on, but she admitted to having possibly voted by mail herself in the past.

"I can't really remember a time that I voted by mail," Barrett said. "It may be in college that I did, when i was living away from home, but I can't, as I'm sitting here, specifically recall a time I voted by mail."

She conceded some of her friends and family voted by mail, and Klobuchar explained her concerns.

"You understand we're operating in a moment where the president is undermining vote by mail, even though a number of Republican governors and Republican senators are supportive of it," Klobuchar said. "Many argue that Bush v. Gore, back to your earlier work, hurt the court's legitimacy. If you are confirmed, the Supreme Court will have not one, not two, but three justices -- you, Justice Kavanaugh and Chief Justice Roberts, who worked on behalf of the Republican Party in matters related to the Bush v. Gore case. Do you think that that's a coincidence?"

"Sen. Klobuchar, if you're asking me whether I was nominated for this seat because I worked on Bush v. Gore for a very brief period of time as a young associate, that doesn't make sense to me."

Klobuchar said she just wondered why that kept happening.

"I just think it's such a coincidence to me, I actually didn't know it until yesterday," Klobuchar said. "Will having justices with this background, two of whom are appointed by the current president, decide any cases related to the upcoming election, do you think that will undermine the legitimacy of the court?"

Barrett sensed that Klobuchar was trying to pin her down on recusal from election-related cases involving President Donald Trump, and the senator pounced.

"You're right, you said you would announce your decision on recusal and wouldn't commit to recusing," Klobuchar said. "Again, I think the public has a right to know that now three of these justices have worked on the Republican side on a major, major issue related to a presidential election."

"We're in an unprecedented time where we have a president who refuses to commit to a peaceful transfer of power, working to undermine the integrity of this election," Klobuchar said, "and yesterday, you wouldn't commit to recuse yourself from the case we just talked about. But now we're considering your confirmation to the highest court in the land in the midst of this election, and in Smiley v. Holm, where the Supreme Court held that a governor is part of the legislative process and therefore a legislature cannot unilaterally change election rules, that could be very important because we have a number of swing states where we have a legislature of one party, governor of the other, and we have this precedent that has been on the books for nearly 90 years. Do you think that that is established supreme court precedent? It said that a governor is part of the legislative process."

Barrett said she didn't know the case and declined to offer a detailed opinion.

"I actually am not familiar with that case," the nominee said. "But it is precedent -- obviously it's a precedent of the court."