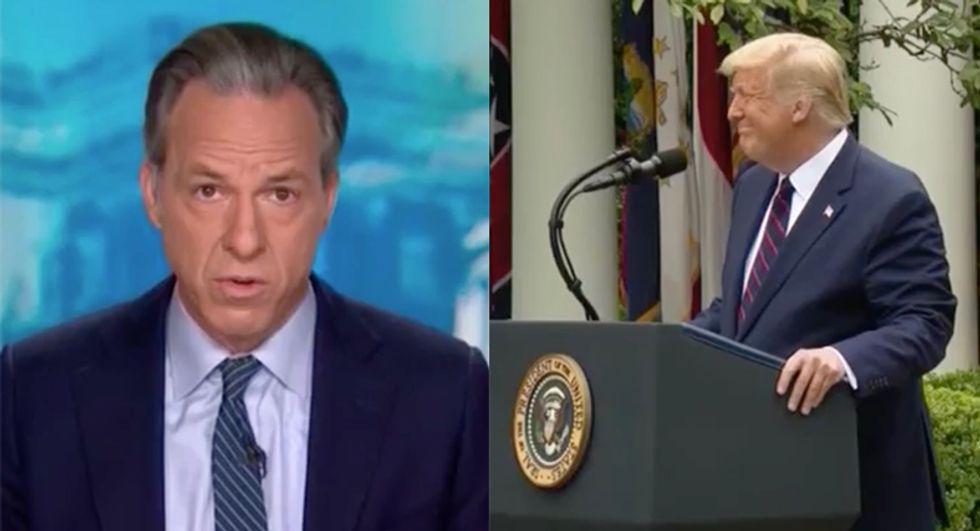 CNN "State of the Union" host Jake Tapper raked Donald Trump over the coals during his closing comments on Sunday for heading out on the campaign trail despite still being sick with the coronavirus.

After pointing out how members of the president's cabinet are doing all they can to use their departments to help the president's faltering re-election campaign, Tapper slammed the president for putting the health of his fans at risk.

"One of President Trump's skills during this era has been to behave with so little regard to basic decency, that those who try to uphold the standards get accused of being partisan," Tapper stated. "Majority Leader Mitch McConnell just admitted this week he hasn't gone to the White House in months because of how the president and his team there behave with so little regard for basic health and safety guidelines."

"President Trump has been a spreader of misinformation about the virus," he continued. "He has been a leader when it comes to recklessness and reckless behavior about the virus. Now he is determined apparently to risk spreading the virus literally. It's no longer just his failure to do everything he can to respect health standards. It's no longer that that has caused the life of loss in a tacit way. He has likely become personally a vector of the disease. We don't know if, after he theoretically contracted the virus, if he spread it in Ohio or New Jersey. The president's doctor, who has been evasive and admitted to putting a positive spin on the president's condition released a letter about his health last night that, frankly, raised more questions than it answered. It neglected to say what symptoms the president may still have, whether he is still on medication."

"Even if President Trump is not spreading the virus anymore as the doctor says, he is increasing the likelihood that other Americans will contract it through holding these reckless rallies as a matter of public health," Tapper added. "The president is taking actions that could result in loss of life -- and for what? To hear the crowd cheering him on? The president is seemingly indulging his ego at the risk of prolonging the pandemic and at the expense of human lives, American lives -- the citizens he swore an oath to protect. It needs to stop. History is not going to be kind to the people around the president who are enabling any of this. It is, frankly, immoral."