'Confusion from top to bottom': Trump aides panic after president returns to the White House 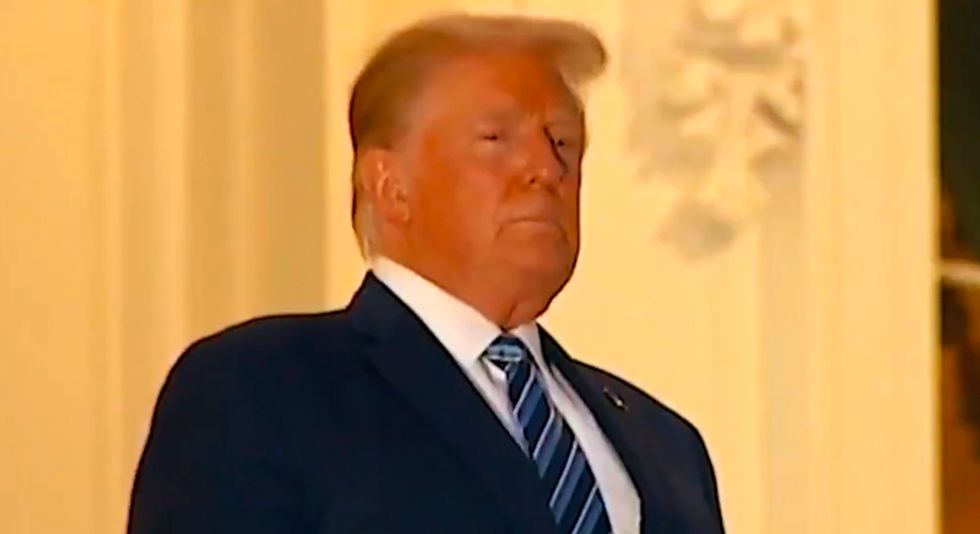 White House staffers who have seen over three years of bullying and firings under Donald Trump are fearful what will come next now that the president has been discharged from Walter Reed Medical Center while still exhibiting symptoms of COVID-19, reports Politico.

According to the report, Trump's return has become even more worrisome to staffers because senior aides to the president are not being forthcoming about the extent of Trump's illness.

"Within the White House, staffers are queasy about the ongoing lack of communication about how and when certain officials became infected," the report states. "No one knows, for instance, when Trump received his last negative test. And several aides said White House chief of staff Mark Meadows was slow to address protocols for West Wing staffers after the explosion of cases. Meanwhile, staffers have continued to find out about new infections through media leaks or as aides and allies like McEnany and Christie publicly announce their own prognosis."

According to one former White House insider, "It’s confusion from top to bottom.”

Former White House coronavirus task force adviser Olivia Troye, explained, "What we are seeing play out is this culture of a group of people who flat out, for one reason or another, felt invincible to the virus. “Now, they are facing the reality of it because they have their own outbreak, and they are part of the cluster. I’m glad I’m not there anymore.”

The Politico report states, "Now, uncertain White House aides are left wondering what the expectations might be in the coming days working around a president who may still be infectious yet is still downplaying the risks.

Added one former senior administration official, "The problem is that anyone who could handle this from a crisis communications or an operational standpoint is long gone. There’s nobody showing any interest in managing the team and keeping them safe.”