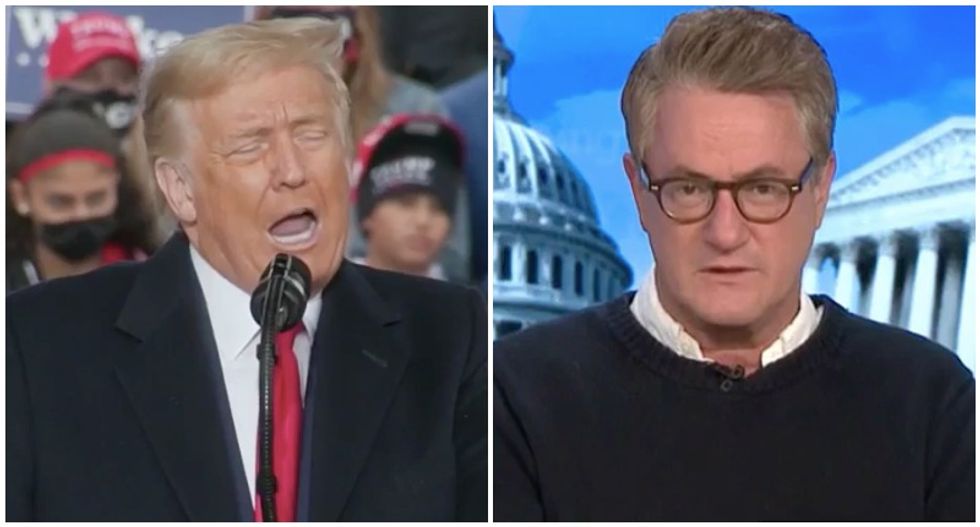 The president attacked Pennsylvania's Democratic Gov. Tom Wolf during an Allentown rally, saying his administration was watching the state's vote count "very closely," and the "Morning Joe" host wondered what he was talking about.

"For the past year, you have had a lot of state attorney generals watching Donald Trump closely, really closely, especially in New York," Scarborough said. "The state of New York, Donald -- hey, Donald, the state of New York, the attorney general there, they're watching you closely. Attorney generals in other states, they're watching you closely, so I am sure they are glad that you are looking back. It's good, it's more reciprocal, and that's fine. Yeah, you watch all you want to watch, and they are just going to keep watching."

"Here is the great news," he added. "Even after the election they'll be watching you."

As the polls continued to show Biden with leads in swing states Trump won in 2016, Scarborough said the president's attacks on election integrity reeked of desperation.

"Donald Trump obviously [is] trying to intimidate the governors of these states," he said. "I don't know how or why, but the man just -- at this point, he just looks desperate."

"I also don't know who at the highest levels is watching them" Thomas said. "Like, what does that even mean? But it does play into things that the president has said for a long time, that seem to be aimed at undermining confidence in the vote, and if, you know, he is saying, 'Watch Philadelphia,' clearly a Democratic stronghold in the state of Pennsylvania, watch these other places, then what he is signaling to people or seems to be signaling to people is, you know, don't necessarily trust the outcome of this vote, and that is the most dangerous part of this, because I don't really think the FBI is watching Gov. Wolf, but this plays into that idea that maybe this election won't be fair, and that is the scarier part about this."