While they can take measures to limit the actual spread, such as longer and stronger lockdowns and mask requirements, many factors determining the spread are outside their control. By contrast, they do have control over the amount of testing, although legislatures can play a role, since they can appropriate or restrict funding. Testing has also become a political issue, since Donald Trump explicitly said that he wanted to see testing slowed so as to reduce the number of cases identified.

I thought it was worth an update to see what the story looks like as the country is now experiencing a huge surge in infections. Here’s the more recent picture showing the ten states with the highest infection rates and the ten states with the lowest rates, based on the John Hopkins Coronavirus Resource Center, 7-day moving averages. (Data are for October 26, 2020.) 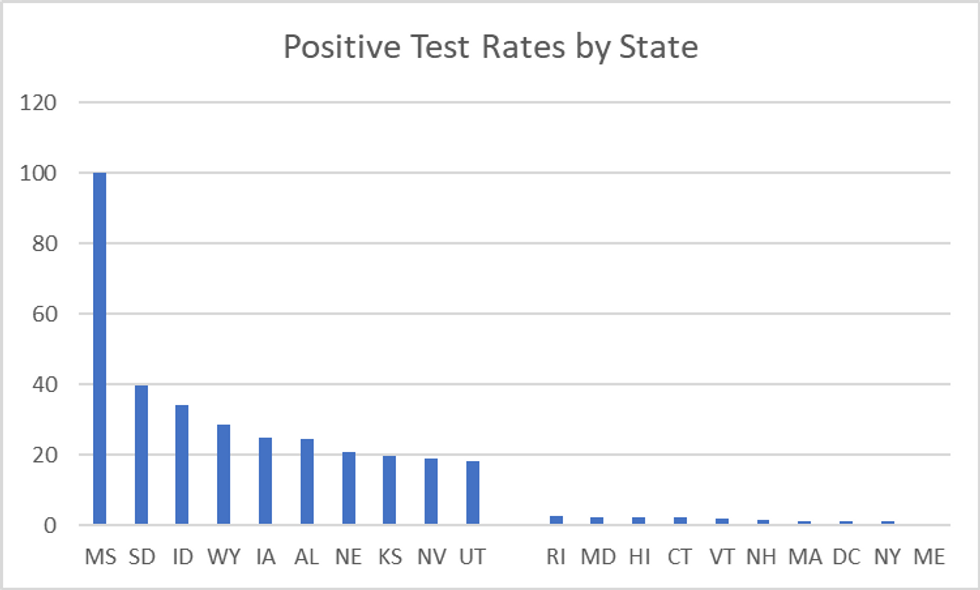 In short, by this measure of efforts at getting the pandemic under control, Democrats seem far more serious than Republicans.

"I was the person who came up with the Jan. 6 idea with Congressman Gosar, Congressman Mo Brooks, and Congressman Andy Biggs," Alexander said in the video. "We four schemed up on putting maximum pressure on Congress while they were voting so that — who we couldn't lobby — we could change the hearts and the minds of Republicans who were in that body hearing our loud roar from outside."

But Brooks disputed all four of the claims he was involved, instead, throwing his staff under the bus.

Speaking to reporters on Monday evening, Brooks said he didn't do planning for the event, but "I don't know if my staff did.. but if they did I'd be proud of them for helping to put together a rally lawful under the First Amendment at the ellipse to protest voter fraud and election theft."

Brooks previously confessed that he knew that the Jan. 6 event could get violent, so he donned body armor under his jacket before he spoke to the crowd at the Ellipse.

See the quote from Brooks below:

Night terrors are defined by the Mayo Clinic, "episodes of screaming, intense fear and flailing while still asleep." The analysis goes on to say, "sleep terrors differ from nightmares. The dreamer of a nightmare wakes up from the dream and may remember details, but a person who has a sleep terror episode remains asleep. Children usually don't remember anything about their sleep terrors in the morning. Adults may recall a dream fragment they had during the sleep terrors."

Youngkin is going all-in on his campaign of literary censorship, despite a Fox News campaign attacking Democrats for attempting to censor Dr. Seuss because the author's foundation stopped printing certain books of his.

Issues like "critical race theory" and censorship of African American history and literature could motivate white supremacists and those on the far-right in next week's election. However, it is unclear if it could make or break the Virginia governor's race, where voters say they're most concerned about the economy and COVID.

A Fox News poll tried to claim that a "plurality" of Virginia voters were against teaching "CRT," yet when asked what the top issues people are voting on in the 2021 election only ranked at 7 percent. Only 39 percent (plus or minus 3 percent), oppose CRT. more people say they support teaching it (27 percent) or don't know enough about it (32 percent). The same poll shows Youngkin's polling at just 44 percent and Donald Trump's at 41 percent. A conservative, anti-CRT group is already launching a $1 million expenditure attacking the education policy. Few other groups are polling the issue and non in the past month.

Democratic challenger Terry McAuliffe said that the issue is nothing more than "another right-wing conspiracy" being used to sow hatred and division.

The Republican lawyer, Blake Murphy, who was scared of the Black author Toni Morrison, is now 27-years-old and working for the National Republican Congressional Committee. He was ridiculed online for his fears caused by the book Beloved, which is based on a true story, depicts a family of former slaves after the Civil War who thinks their home is haunted by their daughter who died eight years prior.

You can see some of the mockeries below:

"It's very stressful and very costly," Spencer recently told USA Today, while also saying that it has taken a toll on him.

"Along with the constant stress, the lawsuit," he says, "cost thousands of dollars to defend." By June 2020, Spencer told the court that the case against him has been "financially crippling."

Spencer's legal options are he must defend himself or get a court-appointed attorney. He opted for the former.

"You say he's representing himself?" asked Maddow. "Serving as his own lawyer? You don't say. Whatever else has happened in your life today, I bequeath you this, little warm fuzziness, the Nazis are representing themselves in court, acting as their own lawyers. That always works out great. Good for them. Couldn't have happened to a nicer bunch."

She noted that another Charlottesville person is being forced to find other legal options after his lawyers quit because he started spewing anti-Semitic threats against one of the lawyers for the plaintiffs.

Other neo-Nazis involved in different cases have been able to hold onto their lawyer, Maddow said, because the lawyer "agrees with them because he himself wants to 'oppose Jewish influence in society.'"

Legal troubles for spencer and others www.youtube.com

'It could end up bad': Pastor behind Patriot Church movement warns of violence if Trump is not made president again