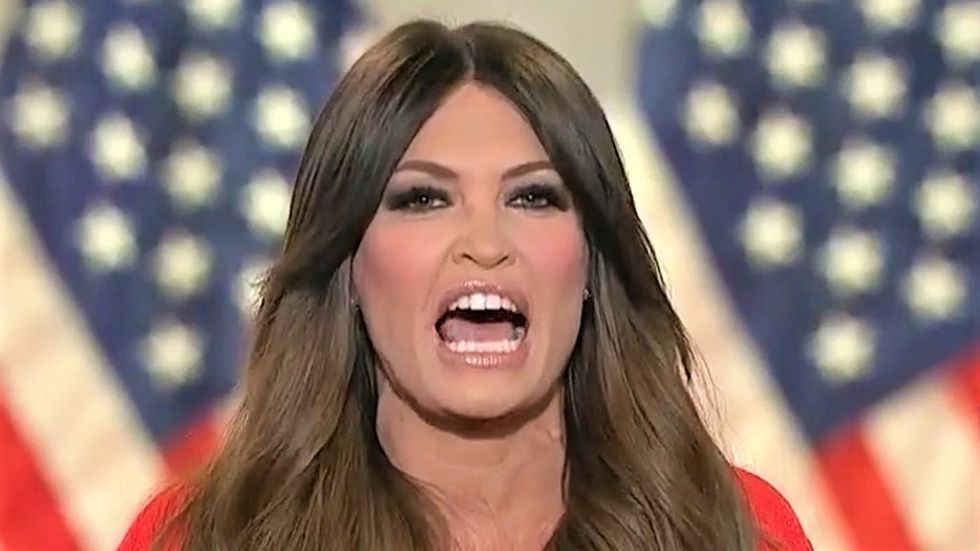 According to a report from the DailyBeast, locals and Donald Trump donors in Montana are furious with Kimberly Guilfoyle, who does double duty as a Trump 2020 campaign official while dating the president's son Don Jr., because she likely exposed them to COVID-19 during a donors' retreat.

The report notes that the retreat, which also featured fly fishing, was held in July before the president visited South Dakota for a July 4th rally at Mt. Rushmore, and that attendees only found out that Guilfoyle tested positive for the deadly coronavirus the day after she left.

According to the Beast's Miranda Green, "Tickets for the Trump campaign’s 'Mountain West Ranch Retreat,' between June 30 and July 2, set just south of Bozeman, went for as much as $15,000. Attendees included Republicans running for competitive state races, including a candidate for lieutenant governor, Kristen Juras; Rep. Greg Gianforte’s wife Susan; and State Auditor Matt Rosendale and his wife, according to a leaked copy of the guest list obtained by a local NBC affiliate. The two-day event included receptions and fly-fishing on a private ranch and a dinner of more than 100 attendees at Big Sky’s ritzy farm-to-table restaurant at Lone Mountain Ranch."

However, photos taken at the event showed few wearing masks as locals hobnobbed with Guilfoyle which caused a panic after the White House announced Guilfoyle showed signs of infection.

According to Gianforte, he was forced to suspend his campaign for his seat and went into quarantine instead.

For others, the risk that they had been exposed was much more costly.

“There’s this whole program set up by the CDC to alert people that have been in contact with someone that may have tested positive,” explained Grant Kennedy, a fly-fishing guide hired for the event who said he found out about Guilfoyle positive test after a co-guide texted him a photo from CNN reporting on the Trump's officials infection.

Kennedy expressed both anger and dismay about the turn of events.

“It’s tough. I was already so unsure because of COVID you know, how busy we were going to be. And then as soon as it’s fine and looks like it can be a really busy season, you all of a sudden have to sit on the couch for two weeks and you’re missing out on those two weeks of work,” he explained. "Obviously, as a guide, you’re essentially putting yourself at risk with every single client we take out here this summer. But just to think about that, why would you choose the time of a pandemic to have a donors retreat? It just seems irresponsible and kind of stupid in a way. Just disregarding all the potential hazards of having a group of people from all over the country, a lot of them are coming from larger cities where, you know, numbers were higher for COVID. And then bringing it to a tiny community like Bozeman.”

The report goes on to note that health officials in the region never received word from campaign officials in Washington about the possible exposure.

“I remember I reached out to our state health department to see if we received anything. We were getting calls about it from the press, but we’re in this position where we didn’t have a case to investigate. And until we have a case to investigate, there’s not a heck of a lot we could do about it,” said Matt Kelley, health officer with the Gallatin City-County Health Department. “I can tell you none of the campaigns got ahold of us.”

The Beast reports that after "the White House Medical Team was notified of her positive test results, the officials said they would take on the next steps of notifying those likely exposed," but that nothing came of that.