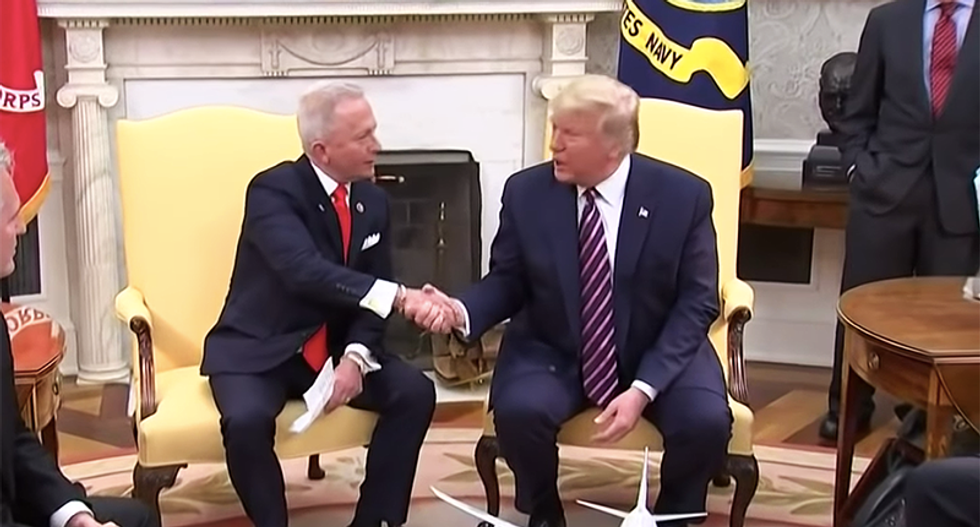 Rep. Jeff Van Drew (R-NJ), who split from the Democratic Party after refusing to vote for the impeachment of Donald Trump may end up serving only one term in the House as he fights for his political life, reports the Wall Street Journal.

The 67-year-old Van Drew, who served in the New Jersey state Legislature for 16 years as a Democrat, jumped to the Republican side of the aisle in the House of Representatives last December and -- now that he facing re-election -- he is scrambling to fend off a stiff challenge from a member of the Kennedy dynasty.

Amy Kennedy, who is married to former ex-Rhode Island Rep. Patrick Kennedy, seeks to replace Van Drew who swept into office as part of the 2018 "blue wave" before he changed sides.

According to the Journal, "Mr. Van Drew now finds himself in a competitive election rated as a tossup by the Cook Political Report. He trailed Ms. Kennedy by five percentage points among registered voters, but within the margin of error, in a Monmouth University poll from earlier this month."

Speaking with Joseph De Avila of the Journal, Van Drew said he hopes voters will judge him by the person he is and not the party he now represents.

"If somebody elected me only because I was a Democrat, I don’t know that those are folks that would be happy,” he explained. “I assume and still believe that most people elected me because of me, because of the work I did to try to help them, because of what I believe as an individual.”

In a high turnout election, with the highly unpopular Donald Trump at the top of the Republican ticket, Van Drew is facing an uphill battle despite being an incumbent.

According to Patrick Murray of Monmouth University, Van Drew hitched his star to a president who is looking at certain defeat in New Jersey.

Stating, "The switch itself is seen as a blatantly political move and not one that was based on principle,” Murray said Van Drew also made his move before the coronavirus pandemic ravaged the country and crippled the economy, making the president even less popular.

"Mr. Van Drew defended his record as a lawmaker and said his long tenure in the state Legislature before entering Congress has proven he knows the needs of this region best. He also said he’ll continue to stand up to leaders in his party when they are out of step with his values, noting that he doesn’t support repealing the Affordable Care Act without having a replacement in place first," the Journal report added.