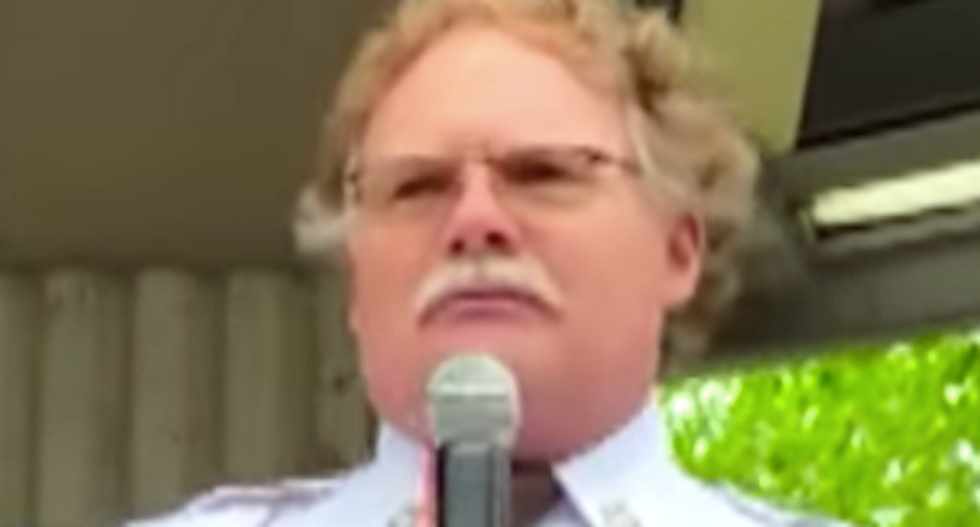 An anti-mask Michigan sheriff shared a stage with one of the right-wing militants who were allegedly plotting to kidnap the Democratic governor.

Barry County Sheriff Dar Leaf was a guest speaker at the May rally in Grand Rapids against stay-at-home orders issued by Gov. Gretchen Whitmer to prevent the spread of the coronavirus, where he stood alongside kidnap plot suspect William Null, reported WXMI-TV.

“I haven't read everything up on it, I've got other duties to do," Leaf told the station when asked about the kidnapping plot. "It wasn't our investigation. I was shocked, did not see this coming with those guys, but still we can't convict them in the media here, they do have a right to a fair trial."

Leaf is no stranger to the right-wing fringe. He has lent support to the Bundy family and has close ties to the rogue Constitutional Sheriff and Peace Officers Association that promotes the legal fallacy that sheriffs are the “highest legitimate law enforcement” in the U.S. and may decide which laws to enforce.

"What's the definition of an arrest?" Leaf said at the May anti-Whitmer rally, flanked by armed militia men. "It's basically taking away your right to free will, our right to move about. That's an arrest, and an unlawful arrest is when we do it unlawfully."

As such, the sheriff has refused to enforce Whitmer's pandemic orders, and he won't enforce new COVID-19 orders issued by the Michigan Department of Health and Human Services.

He also refused to comment on the charges against Null and his brother Michael Null, who are being held on a $250,000 cash bail and could face up to 22 years in prison, if convicted.

“The two gentlemen that I know of from my county, were they involved in that?" Leaf said. "I don't know. They're innocent until proven guilty, and we really, really should be careful, trying to try them in the media."

Leaf then suggested their alleged plot may have been to take Whitmer into custody before the Nov. 3 election and then take her to a secure location in Wisconsin, where they allegedly planned to try her for treason.

“It’s just a charge, and they say a 'plot to kidnap,' and you got to remember that," Leaf said. "Are they trying to kidnap? Because a lot of people are angry with the governor, and they want her arrested. So are they trying to arrest or was it a kidnap attempt? Because you can still in Michigan, if it's a felony, make a felony arrest."

He cited a statute that he believes may have justified the militants' kidnap plot.

The TV station linked to the correct statute, 764.16, which lists certain conditions that a private individual may make an arrest for a felony.

"I have to look at it from that angle," Leaf said, "and I’m hoping that's more what it is, in fact, these guys are innocent until proven guilty, so I’m not even sure if they had any part of it."

This interview with a sitting sheriff in Michigan is absolutely wild. https://t.co/h7WKsrAqCZ
— Ross Jones (@Ross Jones)1602255703.0