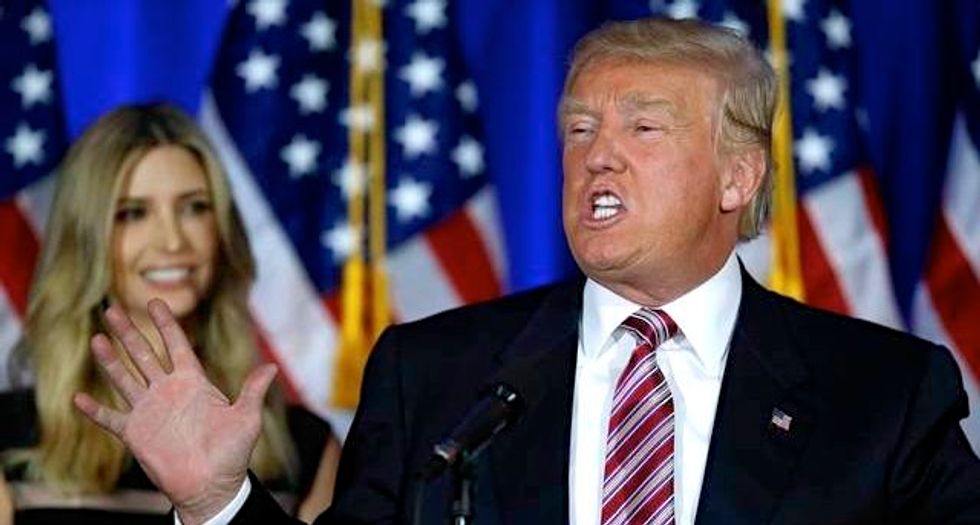 Writing for the conservative Bulwark, former Republican National Committee spokesperson Tim Miller revealed results of a poll his organization, Republican Voters Against Trump, commissioned to see how self-described "undecided" voters view Donald Trump, and pointed out that -- if their responses are to be believed -- the president has no chance of adding enough voters to his base to win re-election.

With Trump trailing in the polls badly to Democratic challenger Joe Biden, political analysts have been warning that the president needs to reel in voters who are the fence over the two widely divergent candidates. With that in mind, Miller's organization went looking for answers to how undecideds viewing the president by asking an open-ended question that let the voters fill in the blanks.

Harkening back to his tenure as Florida Gov Jeb Bush's communications director, when Bush's campaign asked "What do you like least about Jeb Bush?" -- only to receive answers that spelled doom for Bush's presidential aspirations -- Miller explained his group asked a similar question about the sitting president.

"We asked about 350 undecided voters a similar open-ended question to see what was preventing them from voting for Donald Trump," he wrote before revealing that two-thirds of the respondents had little good to say about Trump in the general vein of "he’s a racist/arrogant/unintelligent jerk who “doesn’t represent the country well,” and “unfit to do the job.”

According to Miller, a sampling of the comments included:

"Remember these are the undecided voters," Miller wrote before adding, "This news isn’t as dire for Trump as it was for Jeb—Trump is starting from a much higher floor given that this is a general election, not a primary, and he has a committed base of support. But there are parallels in the sense that those whom Trump is trying to win over have largely rendered a verdict on him based on inherent traits that he can’t change. "

According to the longtime GOP consultant, Trump once had a chance during his presidency to bring more people into his camp but " ... that ship sailed. As for the rest of this stuff, there never was a path to fixing his inherent assholishness, nor his compulsive lying."

"His problem is that they don’t like him," he elaborated before making a prediction.

."In 2016, Trump won, with an assist from Anthony Weiner and Jim Comey, on the back of a surge among these very voters—last-minute deciders who didn’t like either candidate all that much. If he is going to recreate that magic this time, our poll indicates that he’s going to have to do it by disqualifying Biden," he wrote. "And he took one such opportunity off the table by throwing a tantrum and ducking the next debate."