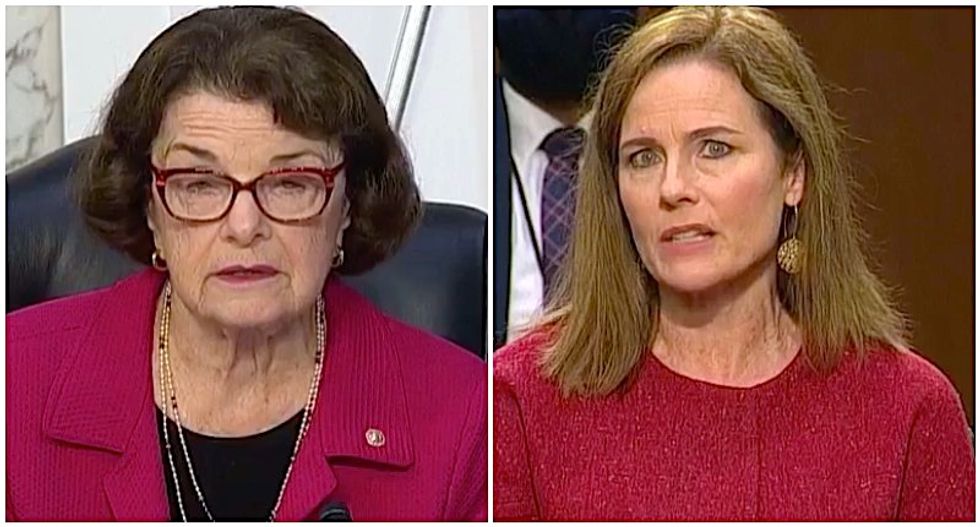 The California Democrat tried to pin her down on the landmark abortion case, but President Donald Trump's nominee to replace Ruth Bader Ginsburg repeatedly dodged the question.

"I want to be forthright and answer every question so far as I can," Barrett said. "I think on that question, you know, I'm going to invoke Justice [Elena] Kagan's description, which is perfectly put. When she was in her confirmation hearing she said she was not going to grade precedent or give it a thumbs-up or thumbs-down, and I think in an area where precedent continues to be pressed and litigated as is true of [Planned Parenthood v.] Casey it would be particularly wrong for me to do that as a sitting judge. So if I express a view on a precedent it signals to litigants that I might tilt one way or another in a pending case."

"So on something that is a major cause, with major effect on over half of the population of this country, who are women, after all, it's distressing not to get a straight answer," Feinstein said. "So let me try again. Do you agree with Justice [Antonin] Scalia's view that Roe was wrongly decided?"

"Senator, I completely understand why you are asking the question, but again, I can't pre-commit or say, 'Yes, I'm going in with some agendas,' but I'm not," the nominee said. "I don't have any agenda. I have no agenda to try to overrule Casey."

"Well, as a person, I don't know if you'll answer this one either," Feinstein said. "Do you agree with Justice Scalia's view that Roe can and should be overturned by the Supreme Court?"

Barrett once again refused to say how she would vote on abortion cases.

"My answer is the same because that's a case that's litigated," she said. "Its contours could come up again, in fact, do come up. They came up last term before the court, so I think, you know, what Casey's standard is, and that's just a contentious issue, which I know one reason why it would be comforting to you to have an answer. But I can't express views on cases or pre-commit to approaching a case any particular way."

Feinstein told the nominee her refusal to answer was unacceptable.

"That makes it difficult for me, and I think for other women also on this committee, because this is a very important case, and it affects a lot of people," Feinstein said. "Millions and millions of women, and you could be a very important vote, and I had hoped you would say as a person -- you have got a lovely family, you understand all the implications of family life [and] you should be very proud of that. I'm proud of you for that, but my position is a little different."

"You're going on the biggest court of this land with a problem out there that all women see one way or another in their life," the senator added. "Not all, but, certainly married women do and others, too, and so the question comes, what happens, and will this justice support a law that has substantial precedent now? Would you commit yourself on whether you would or would not?"