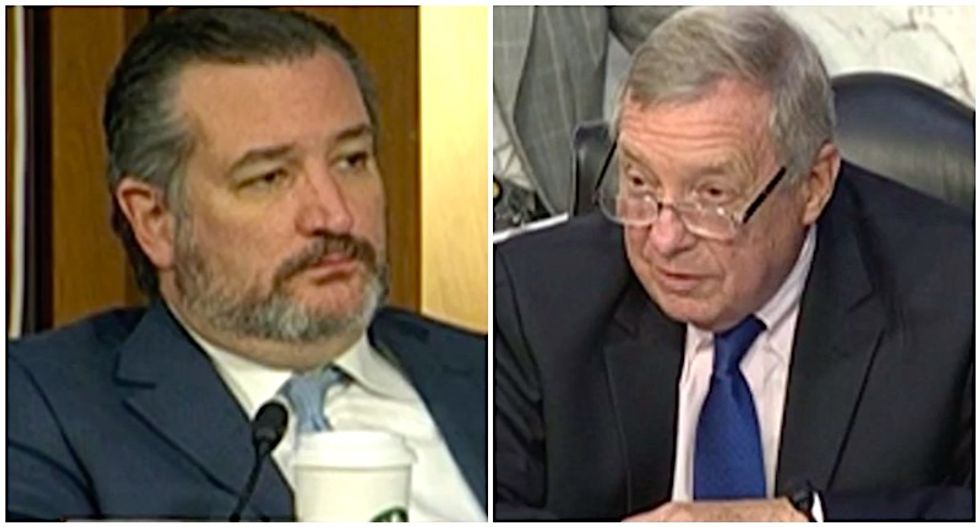 The Texas Republican told the story of Abraham Lincoln waiting to nominate Salmon P. Chase to fill a vacancy shortly after he won re-election in 1864, saying that had no bearing on Trump choosing Barrett weeks before facing his own re-election, and said his Democratic colleagues were simply being sore losers.

"There are many members of this committee that enjoy being students of history," Cruz said. "But to suggest that is somehow a precedent and requires us not to fill this vacancy now is -- I can't put it better than the Washington Post, who fact-checked Sen. [Kamala] Harris on this claim. The Washington Post conclusion was that Sen. Harris' argument wasn't exactly true."

Durbin thanked the senator for his sympathy, and explained this process was highly unusual.

"What we are witnessing this morning and this week is different than anything we have seen," Durbin said. "Some of us have Robert Bork stuck in our craw, others have Merrick Garland stuck in our craw, in terms of what is happening here. We all need to concede we are not in a place where we should be when it comes to the operations of this committee and the Senate, the relationship with the Supreme Court."

Durbin pointed out that Antonin Scalia and Ruth Bader Ginsburg -- who came from opposite ends of the political spectrum -- had been unanimously or near-unanimously confirmed, but he said the nomination process had been broken.

"The chairman started this hearing reminding us about votes that were taken 98-0 for Anton Scalia, 96-3 for Ruth Bader Ginsburg," he continued. "How did we manage to put together five partisan coalitions or people on such opposite ends of the political spectrum who we knew going in

"One of the things we have witnessed here in the time I have served on this committee is a denigration of the process to the point where it is almost useless," Durbin said. "We have reached a point now where gifted, experienced jurists, legal scholars take that seat behind the table and then deny everything, refuse to answer anything. Consider that, a situation where we asked the nominee, can a president unilaterally delay a presidential election? She could not answer it -- too political. Too political? That is the standard for the United States of America. She can certainly have alluded to that. I asked can a president unilaterally deny a woman the right to vote? Sorry, can't answer, the case could come before me someday. It reached the point where Sen. [John] Kennedy asked this learned attorney, professor and jurist if she had any opinion on the issue of climate change. Basically, she said, 'I've never thought about it, don't have any views.'"

"What are we dealing with here?" Durbin added. "We are not dealing with the reality of who this person is and what she believes, but some kind of artifice we have constructed between the nominee and our questions. I would be afraid to ask her about the presence of gravity on earth. She may decline to answer because it might come up a case in a court someday."

Durbin said the nominee won't explain her thoughts and views, but he said President Donald Trump made clear why he needed her, in particular, on the court before the Nov. 3 election.

"We know this process is really stacked," he said. "The president told us so repeatedly. We can't get a direct answer from the nominee, we get direct answers every day from the tweets of the president. We know what his motives were in nominating this person for the Supreme Court, he does not cover it up. It was to make sure there was someone on the court to eliminate the Affordable Care Act."